Gal Gadot's Wonder Women 1984 trailer is officially out and DC fans are riding on the high horses with yet another impressive DCEU film on its way after Todd Phillips' Joker. 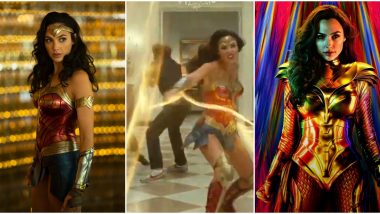 Gal Gadot's Wonder Woman 1984 trailer is officially out and DC fans would be elated with yet another impressive DCEU film on its way after Todd Phillips' Joker. The trailer was launched at Brazil's Comic-Con 2019 on December 8. Wonder Woman 1984 is a sequel to the 2017 film Wonder Woman and is set 70 years after the events of World War I shown in the other movie. Gal Gadot is back playing the superhero role of Diana Prince aka Wonder Woman, and we love her in every bit of the trailer. We also saw the return of Chris Pine as Steve Trevor, Diana's long-lost love who sacrificed himself in the first film. How does he come back from that? No clues just yet. Wonder Woman 1984 Trailer: Gal Gadot Is Back As the Amazonian Superhero and She Brings With Her the Dazzling Magic of the ’80s! (Watch VIdeo)

As the trailer goes viral for all the right reasons, the Wonder Woman 1984 trailer also provided enough material for Twitterati to make memes and jokes on the Gal Gadot movie. A Twitter user joked about Wonder Woman's footwear and wrote 'Am I the only one who spotted Iron Man in Wonder Woman.' An MCU hater jibed about the trailer's final scene involving a trash-can by tweeting 'Diana telling Steve Trevor about cinema and stopping by the MCU section' Wonder Woman 1984 Teaser: ‘Superhero’ Gal Gadot’s Fight to Save the World Will Make You Excited for the Film (Watch Video).

Check out more such jokes and memes below:

Yeah Bruce has never known a woman like her. #WW84 pic.twitter.com/MIcn5k89lm

The Duo Staying Away From the MCU Section

Baby Yoda It Is!

Wonder Woman 1984 is my most anticipated movie of 2020.#WW84 pic.twitter.com/ADRo8cKbAz

Am I the only one ...or anybody else spotted IRONMAN in #WonderWoman

Wonder Woman 1984 is helmed by Patty Jenkins who had also directed the first movie. The film also stars Kristen Wiig, Pedro Pascal, Connie Nielsen, and Robin Wright in major roles. The superhero DC film is all set for a worldwide release on June 5, 2020.

(The above story first appeared on LatestLY on Dec 09, 2019 04:23 PM IST. For more news and updates on politics, world, sports, entertainment and lifestyle, log on to our website latestly.com).