Funny memes ruled the decade grabbing our attention for the longest time while helping us avoid social contact to the maximum. However, what memes ruled the past decade? Well, that can be compiled into a book, but memes that ruled 2019? God, there are some really epic ones. 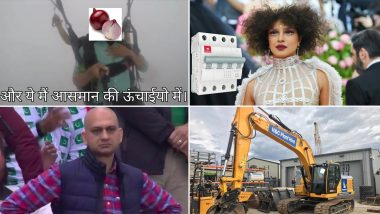 As we bid goodbye to Christmas, we cannot wait to welcome the New year 2020. This new year is extraordinary. It is not only the end of the year 2019, but also an entire decade comes to an end! Yes, the millennials will know the feeling of having had experienced a WHOLE DECADE, as an adult! Well, talking about millennials MEMES, MEMES and more MEMES! Funny memes ruled the decade grabbing our attention for the longest time while helping us avoid social contact to the maximum. However, what memes ruled the past decade? Well, that can be compiled into a book, but memes that ruled 2019? God, there are some really epic ones. Funny JCB Ki Khudai Memes Flood Twitter but Why Is #JCBKiKhudayi Video Going Viral and Trending in India?

We can safely say, that millennials around the world are divided by borders, but united by memes. However, some of the desi memes that took over the internet, last year, have a world of their own. None other than a true desi at heart will understand these memes! A lot happened this year, right from, "JCB ki Khudayi" that had the internet hooked to the "Angry Pakistani fan" that became our reaction to practically everything this, 2019 was kinda epic! Check out the best desi memes that defined 2019:

How Can You Possibly Forget, The Scared Man Paragliding shouting "Land Kara de, Bhai" on the top of his lungs!

want to know why people stand up even when the seatbelt sign is on! 🛫

And the Other Pakistani Fan who Won Hearts!

WHOEVER HE IS I FREAKING SALUTE YOU DUDE pic.twitter.com/FzfW7JZCZe

When "Yelling Woman" and "Clueless Cat" Got a Desi Twist!

1. Me making fun of class topper all year

2. Me begging him for notes one day before exam pic.twitter.com/KVVYAXk0f9

Lifts were invented in 1853

People Before Things Were Invented!

Bulletproof vest was invented in 1893

Desi people are seriously the funniest, I mean talk about self-deprecatory jokes, or making fun of legit anyone, we don't back-off. I mean, Indians can make hilarious memes out of frikkin' JCB!!! Really, there is just no end to things that we find funny. Once a desi, always a desi. You never go back from having a desi version of ANYTHING on Earth!

(The above story first appeared on LatestLY on Dec 27, 2019 09:39 AM IST. For more news and updates on politics, world, sports, entertainment and lifestyle, log on to our website latestly.com).