Zanziman Ellie, 'Real Life Mowgli' From Rwanda, Gets Crowdfunding After Being Bullied by Villagers For Being Different

The 21-year-old man from Rwanda, a real life Mowgli, has received crowdfunding after he was forced to move out of the village for being different. Zanziman Ellie lives in an African jungle and walks nearly 30 km every day. The crowdfunding initiative was taken by Afrimax TV. 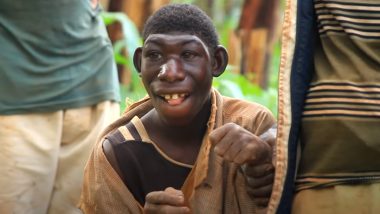 Kigali, December 2: The 21-year-old man from Rwanda, who is also called real life Mowgli, has received crowdfunding after he was forced to move out of the village for being different. Zanziman Ellie lives in an African jungle and walks nearly 30 kilometres every day. He spent most of his life in the jungle as villagers used to bully him for his appearance. ‘Mowgli Girl’, With No Speaking Skills & Necklace Ingrown Into Her Skin, Found Living for Years in Cockroach-Infested Rubbish in Russia (Watch Video).

Ellie was born in 1999. He has been dubbed as "real-life Mowgli" as he lives in the jungle. He suffers from a disorder called microcephaly. It is a condition where a baby's head is much smaller than normal.  His medical condition has made Ellie non-verbal since his childhood. His mother told local media, she lost her five children before Ellie was born. She said tat local used to bully him for his different facial features. International Day of the African Child 2020: A Day Honouring Students Who Participated in Soweto Uprising in 1976.

Video of Zanziman Ellie With His Mother:

The 21-year-old boy never attended school due to his hearing and speaking difficulties. The crowdfunding initiative was taken by the channel that interviewed Ellie's mother. Afrimax TV has also started a GoFundMe page to help Ellie and his family.

The GoFundMe page reads, "Let's help this single mother to raise this child due to the fact that she's unemployed which makes the family-run out of food and forces this young boy to go to the forest and eat grass. Let's contribute and save this boy and his mother's life." According to reports, close to 4,000 USD have been collected so far.

(The above story first appeared on LatestLY on Dec 02, 2020 11:38 PM IST. For more news and updates on politics, world, sports, entertainment and lifestyle, log on to our website latestly.com).