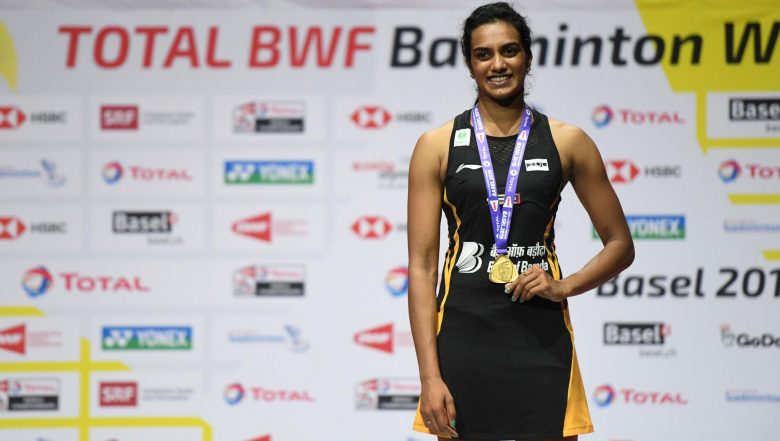 PV Sindhu became the first Indian woman to win a Gold medal at the  World Championships 2019 Final as she went on to beat Nozomi Okuhara at Basel by 21-7, 21-7 in the women's singles final to clinch her fifth medal in this tournament's history. The Indian shutter dominated the Japanese in both sets as she looked in control of the game, right from the start. Even during the mid-game interval, Sindhu was in the lead. With this, the shuttler broke her jinx and won the game. Needless to say that the whole of India is proud of her achievement. PV Sindhu, Ben Stokes and Jasprit Bumrah Enthrall Fans on Super Sunday With Their Spectacular Show.

Sachin Tendulkar, Virender Sehwag, Saina Nehwal, Wasim Jaffer and others posted tweets hailing the shuttler. Speaking of the match, it wouldn’t be wrong to say that it was a one-sided contest as Okuhara had no answers to Sindhu's game. With this,  the ace shuttler also became the joint-most successful women's singles player at the World Championships with five medals from six appearances.

Now, check out a few tweets below:

Congratulations on becoming the 1st ever 🇮🇳 to win the BWF World Championships!

1st Indian ever to win the gold medal at World Championships

Congratulations @Pvsindhu1 for winning the Gold at the BWF World Championships. You are an inspiration! pic.twitter.com/DYu9UkrLIH

Here at the Ind bs WI Test match but what a wonderful news to know that @Pvsindhu1 has won Gold at the BWF World Championships. Many congratulations #PVSindhu pic.twitter.com/9iUkifhHhb

Congratulations @Pvsindhu1 for winning gold at the #BWFWorldChampionships.. Such a proud moment for us 🇮🇳

Purpose fuels passion. Congratulations to the newly crowned World Champion #PVSindhu for winning the 🥇 at #BWFWorldChampionships2019. Time and again, you've made us Indians proud! pic.twitter.com/JDZwHKeioO

Even Indian Prime Minister Narendra Modi praised PV Sindhu for her achievement. In a chat with The Hindu, the shuttler said. “Honestly, I was expecting a long battle, given Okuhara’s reputation. But, I am glad that I could peak at the right time and never really let the lead slip away.” She also gave credits to her Korean coach Kim Ji Jyun who gave inputs to her. She dedicated the medal to her mother who was celebrating her birthday. But the medal has not put her to rest as she will be trying hard to repeat her feat for the Tokyo Olympics 2020.