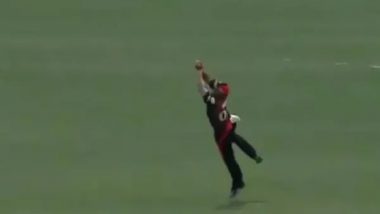 Pravin Tambe has become the first Indian to make a debut in the Caribbean Premier League 2020 as he was picked by the Trinbago Knight Riders. On Wednesday, Pravin Tambe featured in the team of Trinbago Knight Riders and took the stunning catch which was more a flyer. The 48-year-old wound the clock back and took a stunning when Evin Lewis. Tambe also delivered a match-winning performance and only spent 12 runs in his four overs. He was the only bowler to bowl a maiden over, Tambe scalped the wicket of Joshua Da Silva in the 13th over. CPL 2020: Chris Lynn Trolled Mercilessly After Australian Scores 46-Ball 34 During Trinbago Knight Riders vs St Kitts and Nevis Patriots.

The video of the same went viral on social media. Dwayne Bravo led the team in the absence of Keiron Pollard.  TKR registered a 59-run victory. The team features on at the top of the points table with eight wins in as many matches. Now check out the video of the catch below:

48 and flying! Pravin Tambe takes a screamer to take the Googly Magic Moment of the game! What a catch! #CPL20 #CricketPlayedLouder #TKRvSKP pic.twitter.com/xsJC49T2Zi

Lendl Simmons was made the man of the match for the score of 96 runs from 63 balls. The team made a total of 174 runs for the loss of four wickets. Dwayne Bravo was the second-highest scorer of the game with 36 runs from 36 balls. In the same match, Chris Lynn was trolled mercilessly for his slow innings. Talking about Pravin Tambe 48-year-old will be soon seen playing for Kolkata Knight Riders.

(The above story first appeared on LatestLY on Sep 03, 2020 09:11 PM IST. For more news and updates on politics, world, sports, entertainment and lifestyle, log on to our website latestly.com).