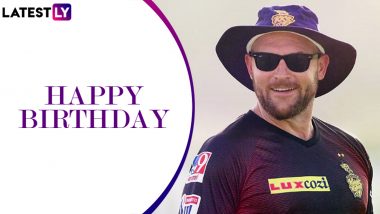 One of the most destructive batsmen to have graced the game of cricket, Brendon McCullum turns 39 on Sunday (September 27), and wishes are pouring in for him from all around the world. The former New Zealand captain was nothing less than a nightmare for the bowlers, and his record is just staggering. It was McCullum only who took New Zealand to great heights in international cricket. Under his leadership, the Black Caps advanced to their first World Cup final in 2015 where they eventually lost to Trans-Tasman rivals Australia. As of now, the Kiwi star is serving as the head coach of Kolkata Knight Riders in Dream11 Indian Premier League (IPL 2020). IPL's Opening Night Changed My Life Forever, Says Brendon McCullum.

IPL has emerged as a carnival for cricket fans all around the world. However, it was McCullum who set to the tournament on fire with mayhem in the first-ever game of the T20 extravaganza. Playing for Kolkata Knight Riders, the dashing opener scored 158 runs off just 73 deliveries against Royal Challengers Bangalore. The Kiwi swashbuckler didn’t look back after that and played one stupendous knock after another. Apart from KKR, McCullum has also represented Kochi Tuskers Kerela (now defunct), Gujarat Lions (now defunct), Chennai Super Kings and Royal Challengers Bangalore. Meanwhile, let’s look at some lesser-known facts about Brendon McCullum as he turns a year older. 5 Dazzling Innings by Brendon McCullum That Left the Opposition Awestruck.

McCullum announced his retirement from all forms of cricket in August 2019, giving a breather to bowlers all around the world. After hanging up his boots, the New Zealand legend became a coach and has done a reasonable job so far. Under his guidance, Trinbago Knight Riders lifted the Caribbean Premier League (CPL) 2020, and now, McCullum is aiming to guide KKR to glory.

(The above story first appeared on LatestLY on Sep 27, 2020 08:00 AM IST. For more news and updates on politics, world, sports, entertainment and lifestyle, log on to our website latestly.com).