CPL 2020 Update: Caribbean Premier League Season 8 to Be Played in Trinidad and Tobago From August 18 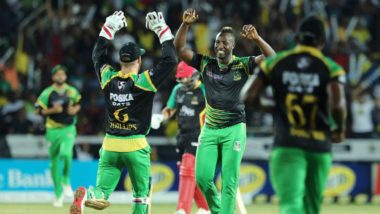 Cricket fans in West Indies are already delighted as their team are in commanding position in the first Test against England in Southampton. To enhance their enchantment, it has been decided that the entire 2020 edition of the Caribbean Premier League (CPL) will take place in Trinidad and Tobago (T&T) this year. The gala T20 tournament will get underway on August 18 and the finals will be played on September 10. A total of 33 matches will be played in the tournament including two semi-finals and a final. The announcement came after getting approval from the local government to conduct the tournament in their region. CPL 2020 Draft: No Takers for Shahid Afridi, Pravin Tambe Picked Up by Trinbago Knight Riders.

Just like many other sporting e events, the fate of CPL 2020 was also under jeopardy due to the COVID-19 pandemic. However, the official announcement has come and the players must be preparing themselves to give their best. Notably, all players and officials will be subjected to quarantine protocol for the first 14 days. Also, teams will stay in one hotel during the course of the tournament. In fact, if a person from a particular group is tested positive during the tournament, the whole cluster will have to serve the isolation period again. CPL 2020: Chris Gayle Pulls Out of Caribbean Premier League.

"All teams and officials will be housed in one hotel and everyone will be subject to strict quarantine protocols for the first two weeks they are in the country. Everyone travelling from overseas will be tested for COVID-19, before departure and then again on arrival in Trinidad," said a statement from CPL.

📢 It’s Official!#CaribbeanPremierLeague 2020 to be hosted in 🇹🇹 Trinidad & Tobago from August 18 - September 10

"Teams and officials will be put into "households" where social distancing will need to be in place. There will be smaller clusters within each household where these measures can be relaxed. However, if any member of this cluster display signs of COVID-19 at any time during the tournament all members of that cluster will be expected to self-isolate for a period of 14 days from the time that a member of that group first shows symptoms."

The matches will be played behind closed doors and the players will also not be seen shaking hands and hugging each other after the fall of a wicket as social-distancing norms will be followed. This will be the 8th season of the tournament while Jason Holder-led Barbados Tridents will step as the defending champions.

(The above story first appeared on LatestLY on Jul 11, 2020 08:31 AM IST. For more news and updates on politics, world, sports, entertainment and lifestyle, log on to our website latestly.com).