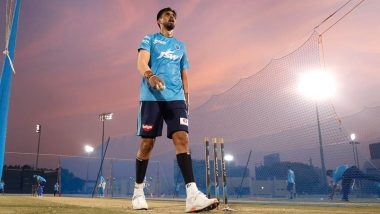 Delhi Capitals have received a huge blow ahead of their opening fixture in Indian Premier League 2020 as premier pacer Ishant Sharma is expected to be out for a considerable amount of time after suffering an injury during a recent training session. The Shreyas Iyer-led side are scheduled to take on Kings XI Punjab on September 20, 2020, at the Dubai International Stadium in IPL 2020. DC Squad for IPL 2020 in UAE: Check Updated Players' List of Delhi Capitals Team Led by Shreyas Iyer for Indian Premier League Season 13.

According to a recent report from Cricbuzz, Ishant Sharma has injured his back on the eve of Delhi Capital’s first IPL 2020 game in Dubai during a recent practice session and could miss the opening clash against KXIP and few after that. The 32-year-old pacer has struggled with a lot of injuries this year, which has seen him miss a considerable amount of matches both for India and domestic teams. Delhi Capitals Skipper Shreyas Iyer Requests Fans to Pray For Team’s Success Ahead of DC vs KXIP, IPL 2020 (Watch Video).

In January of this year, Ishant Sharma suffered an ankle injury during a Ranji Trophy game between Delhi and Vidarbha. However, the pacer quickly recovered from that issue and returned a month later to take part in the New Zealand tour before injuring the same ankle which put doubt over his future.

Following his ankle injury in a Ranji Trophy clash, Ishant underwent an extensive rehabilitation procedure at the NCA before turning up for the New Zealand tour where he played just one game. This remains the pacer’s last competitive match this year and he produces a brilliant performance taking five wickets in the game.

Ishant Sharma is one of the most crucial players in the Delhi Capitals squad and last year formed a brilliant partnership with Kagiso Rabada. However, this time the Shreyas Iyer-led side will have to do without him for some of the opening matches but have the likes of Harshal Patel, Mohit Sharma and Avesh Khan to replace him.

(The above story first appeared on LatestLY on Sep 20, 2020 12:23 PM IST. For more news and updates on politics, world, sports, entertainment and lifestyle, log on to our website latestly.com).