DC vs SRH, IPL 2019 Eliminator, Key Players: Shreyas Iyer, Rashid Khan, Rishabh Pant And Other Cricketers to Watch Out for at VDCA Cricket Stadium in Visakhapatnam 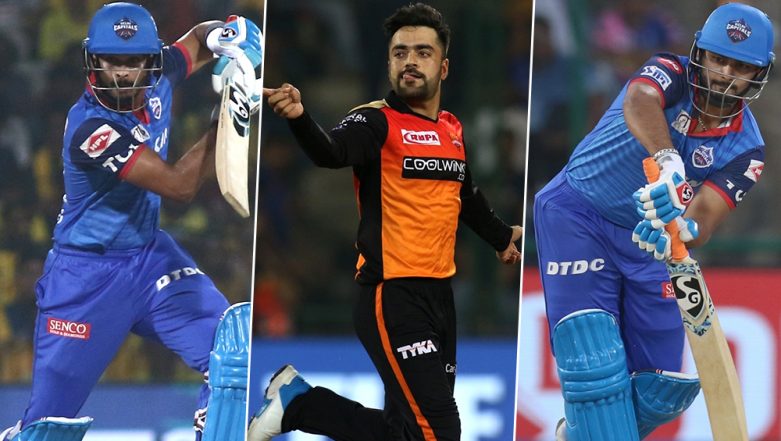 In the only Eliminator match of the Indian Premier League (IPL) 2019, Delhi Capitals (DC) will be taking on Sunrisers Hyderabad (SRH) on May 8. The match will be played at Dr Y.S. Rajasekhara Reddy ACA-VDCA Cricket Stadium, in Visakhapatnam. The winner of the match will play against the loser in Mumbai Indians vs Chennai Super Kings (IPL Qualifier1) match, to stake their claim in the IPL 12 Final. DC vs SRH Head-to-Head Record: Ahead of IPL 2019 Eliminator Clash, Here Are Match Results of Last 5 Delhi Capitals vs Sunrisers Hyderabad Encounters!

In the last meetings, Delhi Capitals and Sunrisers Hyderabad have an even record this season. In their first match of the season, it was Hyderabad who trumped Delhi at their home turf by winning the low-scoring game by 5 wickets. In the second match, it was Delhi who took revenge against their rivals on their home turf, winning the match by 39 runs. As the time ticks away for the crucial game, we bring a list of key players to watch out for in DC vs SRH, IPL 2019 Eliminator match. Delhi Capitals vs Sunrisers Hyderabad Live Cricket Score Eliminator T20 Match.

After a patchy start in the tournament, Shikhar Dhawan found his groove in the second half of the season. In 14 matches that he has played, Dhawan has scored 486 runs at an impressive average of 137.28. The flamboyant batsman has hit 58 Fours so far – the most by any batsman this IPL – and would be eyeing to carry his form against SRH tonight.

Khaleel Ahmed has leaked runs in heaps, but at the same time has also picked up wickets in bunch. In the last 3 matches he has played, Khaleel has picked up 9 wickets. In 8 matches this season, he has picked a total of 17 wickets, becoming the sixth bowler on the list of most wicket-taking bowlers. Khaleel would be eyeing to run rampant batting-heavy Delhi unit given the form that he is in.

Shreyas Iyer has been the vital cog of Delhi’s successful season this year. Much of his team’s chances will depend on how the youngster leads his team in the crucial knock-out game tonight. Iyer has provided stability in the middle order, something which Delhi was missing for a long time. He has maintained a healthy average of 34.00 this season, and would be looking to continue the same against Hyderabad.

Rashid Khan might not have picked a heap of wickets this season; however, he has been successful in stemming the flow of runs. Whenever the captain has thrown the ball towards him, Rashid has delivered for his side. However, he would be looking to put behind the horrendous performance against Mumbai Indians aside tonight. Much of SRH’s chances would depend on how the leg-spinner negates the Delhi’s strong batting lineup.

Given the kind of player that he is, Rishabh Pant will be the x-factor between the two sides tonight. Pant can sway the match in his favour on his given day. Delhi would be banking on his explosive batting skills to see them through against the likes of Khaleel Ahmed, Rashid Khan, and Bhuvneshwar Kumar. Pant has the third-best strike rate this year, behind Andre Russell and Hardik Pandya, and would be looking forward to continuing with the same in an all-important game tonight.

Delhi had an amazing run this season, also being at the top spot for a brief period of time. On the other hand, Sunrisers Hyderabad had two of the best batsmen this season, David Warner and Jonny Bairstow, and despite that, they ran out of gas in the middle of the season, and barely managed to qualify for the Playoffs with a higher Net Run Rate (NRR).

Which among the rebranded Delhi Capitals or the lucky Sunrisers Hyderabad set their foot closer to the IPL 12 Final tonight? Stay tuned to LatestLY for all the latest updates about Indian Premier League (IPL) 2019.