Dean Jones Dies Due to Cardiac Arrest in Mumbai, Australian Cricketer-Turned-Commentator Was 59 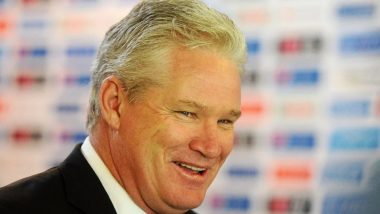 Dean Jones has passed away due to a cardiac arrest. The 59-year-old Australian commentator was a part of the Star Sports commentary panel and was in a bio-secure bubble. He was a commentator for the Indian Premier League 2020. If reports are to be believed he has succumbed to a heart attack. He would present the analysis of the game on Star Select. The former Australian great was put up in a seven-star hotel in Mumbai. Apart from his commentary stint, his show, 'Prof Dean' on NDTV was a hit. The Australian commentator would come up with mathematics where he would calculate the probability of the winning team and most of the times, he was quite accurate with his calculations.

He would include the weather and pitch conditions while making mathematical calculations which were certainly liked by the fans. Like us, even the fans are quite shocked about the sudden demise. Vikrant Gupta shared a tweet on social media and expressed his grief. Check out the tweet below:

What am I hearing of Dean Jones? He passed away, dying of a stroke in Mumbai. Shocking

The details of his death are yet to be known. But all his fans are definitely shocked by the sudden demise of the former Australian great.  Dean Jones featured in 52 Test matches scoring 3631 runs at an average of 46.55. The former Australian cricket also played 164 ODIs and scored 6068 runs. During his ODI career, Jones scored seven centuries and 46 fifties.

(The above story first appeared on LatestLY on Sep 24, 2020 04:09 PM IST. For more news and updates on politics, world, sports, entertainment and lifestyle, log on to our website latestly.com).