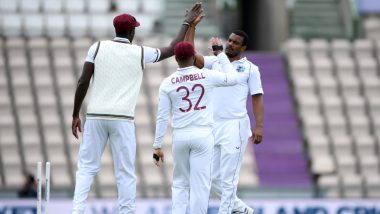 Cricket returned back to the international stage after nearly four months away with England vs West Indies as the two sides faced each other at the Ageas Bowl stadium in the first of the three scheduled Test matches. After five gruelling days, Windies emerged victories as they defeated the Three Lions by four wickets. Following the win, entire cricket fraternity including Sachin Tendulkar and Virat Kohli applauded the Caribbean team for their effort. Jermaine Blackwood Stars As West Indies Beat England by Four Wickets, Twitterati Praise Visitors Emphatic Display.

Ben Stokes, who captained England in the absence of Joe Root, elected to bat after winning the toss but the decision backfired as the hosts conceded a 114-run lead after the first innings. Riding on Zak Crawley’s fifty, the hosts put forward a target of 200 runs which the visitors chased down courtesy of a brilliant knock from Jermaine Blackwood. England vs West Indies, 1st Test 2020, Day 5, Stat Highlights.

Several cricketers were impressed with the grit and determination West Indies showed to steer themselves away from a tight situation and eventually record a win which puts them 1-0 ahead in the series. Here are some of the reactions.

Good all-round performances by players from both teams.

Jermaine Blackwood played a crucial knock in a tense situation to see @windiescricket through. An important win which has set up the series perfectly. #ENGvWI pic.twitter.com/PLbJlqIe8c

Wow @windiescricket what a win. Top display of test cricket.

First game after the break belongs to us!

Some gritty performance from the lads. This team deserves the win in this game. Congratulations boys

Many congratulations @windiescricket on a brilliant win. Great display of skills and maturity and extremely well led by Jason Holder. Top knock from Blackwood in the fourth innings and West Indies showing how it is done #ENGvWI pic.twitter.com/Y09bLzwaYk

Cricket is so much better with @windiescricket doing well in the longest format of the game.Congratulations to the WI team for winning the test match #ENGvWI

A stunning performance from the Windies as they take a 1-0 series lead over England: https://t.co/aUIEtipSdk #ENGvWI pic.twitter.com/HgFOJsFJJo

The second game will be played at the Old Trafford Stadium on July 16 and England will be hoping to level the series. The hosts will have regular captain Joe Root back for the next game while Start Broad could also be recalled back to the team, which might prove to be a pivotal factor in the final outcome.

(The above story first appeared on LatestLY on Jul 12, 2020 11:49 PM IST. For more news and updates on politics, world, sports, entertainment and lifestyle, log on to our website latestly.com).