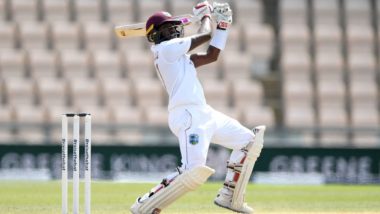 Day 5 of the first test between England and West Indies turned out to be very interesting. With a target of 200 runs by the Windies, Jofra Archer started his day scalping three quick wickets. But it was Jermaine Blackwood who stood tall and delivered a match-winning performance. The batsman led the team to a four-wicket victory. Blackwood scored 95 runs and displayed nerves of steel in the second innings. In this article, we bring you the stat highlights of day 5, but before that, let's have a look at how the day panned out for both sides. England vs West Indies, 1st Test 2020, Day 5, Highlights.

As mentioned above, England had laid the target of 200 runs for the visitors.  Along with Jofra Archer, Mark Wood also joined the bandwagon with one wicket. But no bowler from the English side could get rid of Blackwood. The post-lunch-session proved to be quite important for the Windies as  108 runs were scored in this session with the fall of one wicket. In the end, it was West Indies who had the last laugh. Now let's have a look at the stat highlights of the day 5

# West Indies won for the  58th over England in Tests.
# This was the 31st Test match win for the Caribbeans vs England in England.

# Ben Stokes' first Test as a captain ends in a defeat.

#This was his sixth five-wicket hauls in Tests.

Jason Holder and John Campbell remained unbeaten in the end. The next match will be held on July 16, 2020, at the Old Trafford Cricket Ground in Manchester. Jason Holder's men now lead the three-match Test series by 1-0.

(The above story first appeared on LatestLY on Jul 12, 2020 10:44 PM IST. For more news and updates on politics, world, sports, entertainment and lifestyle, log on to our website latestly.com).