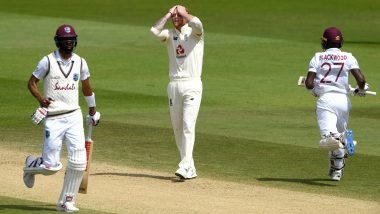 West Indies outclassed England by four wickets in the first international cricket match post lockdown as they emerged victorious in the opening Test to lead 1-0 in the three-game series. Doubts will be raised over the host’s team selection for this clash as they failed to keep up with the visitor’s relentless bowling attack. Following a brilliant win, Netizens took to social media to praise the Caribbean team on their brilliant win. ENG vs WI 1st Test 2020: West Indies Defeat England by Four Wickets, Lead Series 1-0.

With rain playing spoilsport in Day 1, the clash was stretched out till the final day as West Indies put on a dominant display. In the very first session on Day 5, Shannon Gabriel dismissed the remaining two England batsmen as the West Indies were given a target of 200 runs. The hosts started brilliantly Roston Chase and Jermaine Blackwood’s partnership steadied the ship for the Caribbean side. Jofra Archer’s Old Tweet About Jermaine Blackwood Goes Viral After West Indian Batsman’s Brilliant Outing Against England on Day 5 of 1st Test 2020.

The three Lions were then given a lifeline after Chase’s dismissal but Blackwood hung in there and made sure his side didn’t lose any more wickets. The 28-year-old played a brilliant knock but missed out on a century as he was dismissed on 95. However, his inning was enough to guide West Indies to a win and take 1-0 lead in the series.

First game after the break belongs to us!

Some gritty performance from the lads. This team deserves the win in this game. Congratulations boys

A stunning win. WI lost the toss but they were ahead in this match for the large majority of it. Even today when they fell behind—at 7 for 2 (& an opening batsman retired hurt)—they didn't give in. From selection to strategy to execution - they were the better team. #ENGvWI

Great commitment should by @windiescricket and great way to close the match with one up in the series.

Kuddos to their efforts.@englandcricket might come strong in next game.#Blackwood 👍👌

to all those who undermined windies potential to win this test match #ENGvWI pic.twitter.com/NXRvvAhOjq

A wonderful test match with an excellent performance by @windiescricket who fully deserve the win. This thing called test cricket really is quite good.

What-a-win, to chase down 200 after being 27/3. Against Archer at his vicious best. #ENGvWI

Great knock by Jermaine Blackwood. Hope this marks the revival of @windiescricket #ENGvWI

He came when West Indies was 27 for 3 while chasing 200 with all the question mark on his spot after throwing his wicket the in first innings but he has played a absolutely fantastic 95 runs from 154 balls including 12 fours. Well played, Blackwood. #ENGvWI pic.twitter.com/MkXM3aksEH

The second game of the series will be played at the Old Trafford Cricket Ground and will start from July 16, 2020. England will have regular captain Joe Root back for that clash and Stuart Broad, who left out for this game, could also be included. So with most of their senior players returning, the Three Lions will be hopefuls of levelling the series.

(The above story first appeared on LatestLY on Jul 12, 2020 10:43 PM IST. For more news and updates on politics, world, sports, entertainment and lifestyle, log on to our website latestly.com).