England vs Ireland 1st ODI 2020: Jonny Bairstow vs Boyd Rankin and Other Exciting Mini Battles to Watch Out for in Southampton 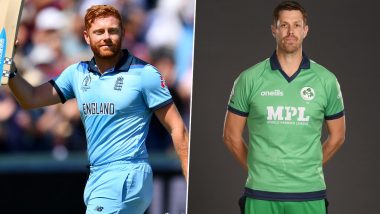 Cricket fans must brace themselves as England are set to lock horns with Ireland in the first ODI of three-match series. The encounter will be played on July 30 (Thursday) at the Rose Bowl in Southampton. The series holds even higher relevance as the first ODI will mark the start of inaugural ODI Super League, a qualifier for the ICC Cricket World Cup 2023 in India. Eoin Morgan and Co will certainly start the series as favourites. However, the visitors have the services of many veteran players who can turn the tables around. Below, we’ll look at some mini-battles which one will witness during ENG vs IRE 1st ODI 2020. England vs Ireland Dream11 Team Prediction: Tips to Pick Best Team.

England are playing their first ODI at home after their 2019-World Cup triumph and will like to extend their sensational run in limited-overs cricket. They, however, will miss the services of Joe Root, Ben Stokes and many other key players who participated in the recently-concluded Test series against West Indies. On the other hand, Ireland skipper Andy McBrine and Kevin O Brien showcased good form in practice matches and will aim to replicate their brilliance in ODIs too. Meanwhile, let’s look at some mini-battles which can enhance the thrill of the first ODI. England vs Ireland, Southampton Weather, Pitch Report & Rain Forecast.

The England wicket-keeper might have got dropped from the Test team. However, he continues to be a vital part of his side’s white-ball set-up. The opener scored a sensational century in the practice game and will not mind breaching the three-figure mark again in the first ODI. Ireland will rely upon Boyd Rankin to breach Bairstow’s defences with the new ball. Notably, the right-arm pacer, who has played 7 ODIs and 2 T20Is, has played alongside Bairstow and must be knowing about his strengths and weakness.

Playing against his own compatriots might be emotional for England skipper Morgan. However, that doesn’t restrict him from taking the Irish bowlers to cleaners. The southpaw has played several good knocks against his former team and will look put up a match-winning performance again, He, however, will be challenged by left-arm spinner George Dockrell who doesn’t give easy runs in the middle overs. Also, the Southampton track is expected to offer some turn and Dockrell must make full use of it.

The Irish opener is known to go after the bowlers from the outset and the home team must vary the fact. However, the dasher has to tackle left-arm pacer David Willey who can swing the new ball very well. Also, the bowler is making a comeback after more than a year and will be determined to make a mark.

(The above story first appeared on LatestLY on Jul 30, 2020 08:00 AM IST. For more news and updates on politics, world, sports, entertainment and lifestyle, log on to our website latestly.com).