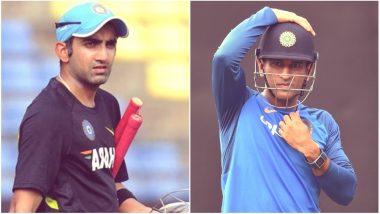 MS Dhoni's retirement talk has once again surfaced with former Kolkata Knight Riders (KKR) captain Gautam Gambhir voicing his opinion. Dhoni has been out of action since the 2019 Cricket World Cup in June last year and now is set to make a comeback with Indian Premier League 2020 (IPL 2020) to be held in the United Arab Emirates (UAE). Meanwhile, Gambhir has said that it is upto an individual to decide when to quit playing and age is just a number when it comes to form. MS Dhoni Retirement: Will Chennai Super Kings Captain Retire After IPL 2020?

"If he is great fitness and form, I think he should keep continuing playing because no one can actually force anyone to retire. A lot of experts can put a lot of pressure on people like MS Dhoni because of their age and stuff but again it's an individual decision, when you started playing cricket it was your individual decision. When you want to leave it is again your individual decision," he added. IPL 2020: MS Dhoni, Suresh Raina, Ravindra Jadeja and Other Players of CSK Squad to Leave for UAE Between August 10-16, Claims Report.

The IPL 2020 schedule is yet to be announced by BCCI but as confirmed by IPL chairman Brijesh Patel, the T20 league will take place between September 19 to November 08.

(The above story first appeared on LatestLY on Jul 25, 2020 08:10 PM IST. For more news and updates on politics, world, sports, entertainment and lifestyle, log on to our website latestly.com).