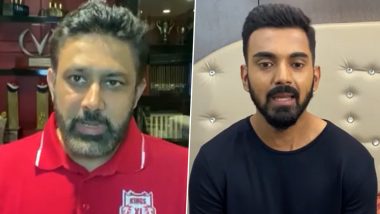 As India observes its 74th Independence Day on August 2020, people of the nation are celebrating the occasion with great pride and honour. On the occasion, the official Instagram account of Kings XI Punjab (KXIP) shared a compilation video in which the likes of head coach Anil Kumble, skipper KL Rahul and others wished their fans on the prestigious day. People featuring in the video also talked about their maiden call-up experience of playing for India in jam-packed stadiums. Kumble revealed that he applied for passport after getting selected for the Indian team while Rahul got the news of his selection from his state team’s manager. Happy Independence Day 2020 Greetings: Virat Kohli, Yuvraj Singh, Suresh Raina Lead Cricket Fraternity in Wishing Indians.

Coming to cricket action, these KXIP stars must be gearing up for the 2020 edition of the Indian Premier League which will get underway on September 19 in UAE. KL Rahul will lead the franchise for the first time and will like to guide Punjab to their maiden IPL title. He’ll be accompainied by the likes of Mohammed Shami, Glenn Maxwell, Chris Gayle and Nicholas Pooran who are specialists in the shortest format of the game.

(The above story first appeared on LatestLY on Aug 15, 2020 04:09 PM IST. For more news and updates on politics, world, sports, entertainment and lifestyle, log on to our website latestly.com).