Fast-bowler Hasan Ali and Pakistan Cricket Team recreated "pawri ho rahi hai" viral video following the T20I series win over South Africa in Lahore. Recently, a video went viral in which a girl named Dananeer, who is a social media influencer, was seen taking a selfie video with car and her friends in the background. 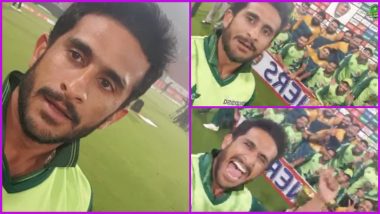 The viral video has inspired many other parody clips and memes as well. Even, the hashtag #PawriHoRaiHai was trending on social media sites. And now Hasan Ali jumped the bandwagon following Pakistan’s series win. The video was shared by Pakistan Cricket Board (PCB) on Twitter.

Pakistan defeated South Africa by four wickets at the Gaddafi Stadium in Lahore to win the three-match series 2-1. Earlier, Pakistan won the series opener and then South Africa levelled with a win in second T20I. Set a target of 165, Pakistan crossed the line in 18.4 overs with Hasan Ali scoring 20 off just seven balls. Batting first South Africa were 65 for seven at one stage before David Miller’s 85 off 45 balls lifted the visitors to 164.

(The above story first appeared on LatestLY on Feb 15, 2021 09:32 AM IST. For more news and updates on politics, world, sports, entertainment and lifestyle, log on to our website latestly.com).