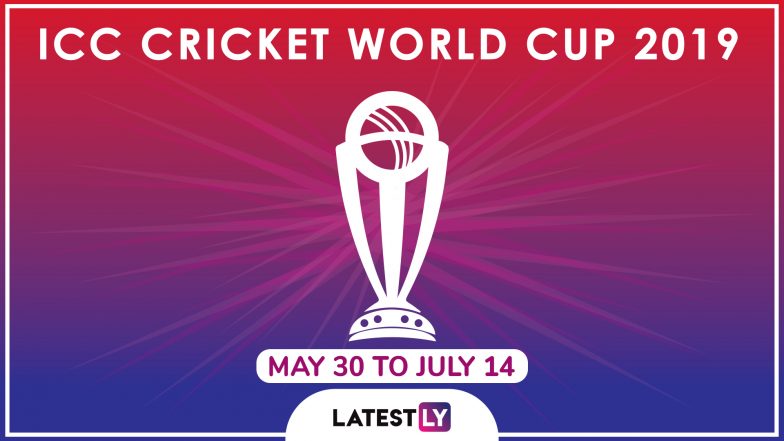 The stage is all set for year’s biggest cricketing tournament, ICC Cricket World Cup 2019. The 12th edition of Cricket World Cup, International Cricket Council (ICC)’s flagship event is scheduled to kick off from May 30 and last until July 14. The ten teams participating in CWC19 are – England, India, Australia, Pakistan, New Zealand, South Africa, West Indies, Bangladesh, Afghanistan and Sri Lanka. Hosts England will play South Africa in the opening fixture of ICC World Cup 2019. As for die-hard cricket fans in India, Virat Kohli’s side will begin their campaign from June 5 onwards. Those who are looking for ICC World Cup 2019 schedule including all CWC19 fixtures with match timings in IST (Indian time) and venue details, get ready for all important information. You can also download complete ICC Cricket World Cup 2019 schedule timetable in PDF format for free.

There are ten cricket grounds that will be hosting the CWC 2019 matches, and they are - Edgbaston in Birmingham, Bristol County Ground in Bristol, Sophia Gardens in Cardiff, Riverside Ground in Chester-le-Street, Headingley in Yorkshire, The Oval in London, Old Trafford in Manchester, Trent Bridge in Nottingham, Rose Bowl in Southampton, Lord's in London and County Ground in Taunton.

Coming to how points will be awarded in the league stage, which will be crucial for sides making to the knockout stage. Each side will get two points for winning a match and no points for the losing team. In case of a tie, both teams get one point each. If teams are tied on the points table, they will be ranked on the basis of their Net Run Rate (NRR).

It's going to be an exciting one and half month of pure cricket and madness with fans cheering their side to lift the coveted World Cup trophy. Defending champions Australia will be looking forward to retaining while two-time winners India along with tournament favourites England and South Africa, dark horses West Indies and New Zealand also in contention. And how can one forget the previous winners Pakistan and Sri Lanka with up and coming side, Afghanistan? Get, set go for the most thrilling cricketing tournament.