While most of the fans would be aware that Marnus Labuschagne made his Test debut in October 2018, many might not know that the batsman took a sensational catch against India four years before his maiden Test appearance. It was the second Test of India's 2014-15 tour of Australia, and the venue was the Gabba in Brisbane. He dismissed Varun Aaron. 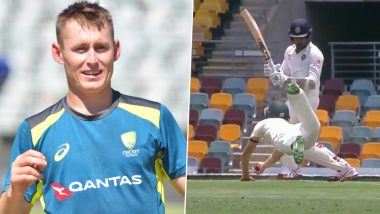 Marnus Labuschagne is indeed a vital part of Australia's Test cricket team, and his record in the most extended format is phenomenal as well. The right-handed batsman has so far scored 1752 runs in 17 Test matches at a staggering average of over 60. While most of the fans would be aware that  Labuschagne made his Test debut in October 2018, many might not know that the batsman took a sensational catch against India four years before his maiden Test appearance. It was the second Test of India's 2014-15 tour of Australia, and the venue was the Gabba in Brisbane. Curious Marnus Labuschagne Asks Shubman Gill About His Favourite Cricketer.

Labuschagne – the then 20-year-old – was added in the national squad on the back of some brilliant performances for Queensland in the domestic circuit. However, he wasn't added in the playing XI owing to presence of Shane Watson, Steve Smith, Mitchell Marsh and Shaun Marsh. Nevertheless, he got the chance to take the field as a substitute fielder. The then Aussie captain Steve Smith placed him in the forward short-leg area during the latter half of India's first innings. India vs Australia 4th Test 2021 Preview.

The youngster didn't disappoint as he took a breath-taking catch to dismiss Varun Aaron. The Indian pacer couldn't read Nathan Lyon's turning delivery as the ball, as per the stand-in umpire, took Aaron's bat's inside edge before Labuschagne completed the dismissal. Australia's Incredible Record at "Fortress" Gabba a Worry for India.

Notably, the dismissal was controversial as several netizens pointed out that the ball has touched the ground. There were also doubts whether the HotSpot on the bat was off an inside edge, or from the bat brushing the pad. Nevertheless, the Decision Review System (DRS) wasn't included in the series as Aaron had to walk off. Subsequently, the visitors were bundled out for 408 runs, and the home team went on to register a four-wicket triumph.

More than six years have been passed since Labuschagne took that catch and now, he has emerged as a cornerstone of the Test team. He'll be up against India at the same Gabba Stadium in the fourth and final game and would be determined to make a mark. With the series poised at 1-1, the Brisbane clash – which gets underway on Friday (January 15) – is a decider and both teams must leave no stones unturned to get the favourable result.

(The above story first appeared on LatestLY on Jan 14, 2021 05:19 PM IST. For more news and updates on politics, world, sports, entertainment and lifestyle, log on to our website latestly.com).