India vs Australia 4th Test 2021 Preview: Likely Playing XIs, Key Battles, Head to Head and Other Things You Need to Know About IND vs AUS Match at The Gabba

Both sides have been hit with injuries, however India have been impacted a lot. Ravindra Jadeja and Hanuma Vihari have been ruled out of the fourth Test and doubts remain over fast-bowler Jasprit Bumrah and Ravi Ashwin’s participation. Australia too will be without opening batsman Will Pucovski. 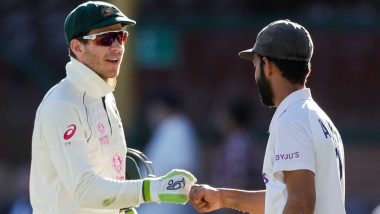 India and Australia meet in the fourth and last Test match of the series. The series is evenly poised at one each after three matches. Australia won the series opener and then India bounced back to level the series. In the third Test, India secured a draw and made sure they stay alive in the series. Now both teams will be looking to clinch the series in the deciding match at The Gabba in Brisbane. Australia's Incredible Record at "Fortress" Gabba a Worry for India.

Both sides have been hit with injuries, however India have been impacted a lot. Ravindra Jadeja and Hanuma Vihari have been ruled out of the fourth Test and doubts remain over fast-bowler Jasprit Bumrah and Ravi Ashwin’s participation. Australia too will be without opening batsman Will Pucovski.

India and Australia have faced each other 101 times in Tests. Australia leads the head-to-head record with 43 wins, while India have won 29 of those. 28 matches have ended in draw while one Test finished as a tie. Out of the 101 Tests between these two teams, 51 have been played in Australia. Apparently, home team has won 30 matches while India just eight Tests. 13 Test matches between these two teams in Australia have ended in draw.

Steve Smith returned to form in the Sydney and he now holds key for Australia apart from him Pat Cummins remains Australia match-winner in the bowling department. In the Indian camp, all eyes will be on Rohit Sharma and young pacer Mohammed Siraj.

It is going to be an interesting battle between Rohit Sharma and Mitchell Starc at The Gabba with both looking to dominate each other. Navdeep Saini will be keen to do well and he will be hoping to trouble David Warner.

The fourth Test between India and Australia will be played at The Gabba in Brisbane. The fourth Test will see spectators in limited numbers as well. The Forgotten Australia vs India Brisbane Classic.

The fourth game of the series between India and Australia is scheduled to start at 05:30 am IST (Indian Standard Time) and 10:30 pm local time.

Sony Pictures Networks hold the official broadcasting rights of the India tour of Australia 2020-21. The fourth and the final Test will be telecast live on Sony SIX, Sony TEN 1, Sony Ten 3 and its HD channels. The live online streaming of the IND vs AUS fourth Test will be available on Sony’s OTT platform SonyLiv. Why both Wriddhiman Saha and Rishabh Pant should be in the Indian playing XI for the Gabba Test

(The above story first appeared on LatestLY on Jan 14, 2021 01:16 PM IST. For more news and updates on politics, world, sports, entertainment and lifestyle, log on to our website latestly.com).