Zampa has had considerable success against Kohli in limited overs cricket, dismissing the Indian captain seven times but he points out the fact that he has also conceded a lot of runs. 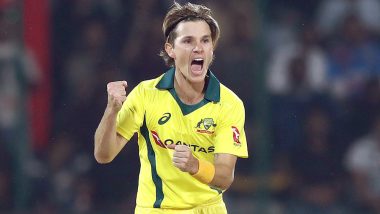 Sydney, November 22: Indian captain Virat Kohli maybe competitive and even antagonistic at times to his opponents on the field but he is a different person altogether off it, said Australian spinner Adam Zampa.

After years of facing Kohli as an opponent, Zampa got to see what it is like sharing a dressing room with the 32-year-old right-hand batsman in the 2020 Indian Premier League (IPL), where Zampa played under Kohli's captaincy with the Royal Challengers Bangalore.

"He's absolutely not what you see on the cricket field," Zampa is quoted as saying by the Sydney Morning Herald. "He always brings his intensity to training and the game; he loves competition, he hates losing as much as anyone. He probably shows it more than anyone." India vs Australia ODI Series 2020 Live Telecast and Online Streaming: Get IND vs AUS Free TV Channel Details and Match Timings in IST.

"Once he's off the park, he's the most chilled guy. He's watching YouTube clips on the bus, he'll laugh out loud. There was a cricket clip recently from cricket.com.au, there was a funny run out, he was laughing about it for three weeks' straight. He loves holding onto jokes like that."

Zampa said that Kohli had messaged him on WhatApp in his first day with RCB. "Zamps, here's the $15 off voucher at a vegan restaurant from Deliveroo," it read. "It's a really good restaurant."

"It was the first day I arrived [and] he WhatsApped me," said Zampa. "I didn't have his number. He made it as if we've known each other forever."

Zampa has had considerable success against Kohli in limited overs cricket, dismissing the Indian captain seven times but he points out the fact that he has also conceded a lot of runs. India’s Likely Playing XI for 1st ODI vs Australia: Probable Indian Cricket Team Line-up for Series Opener in Sydney.

"I've got him out seven times, but they're at a good click; the economy is well and truly over six runs per over as well. It'll be interesting now we're closer," he said.

The pair will face each other again when India's tour of Australia begins later this month with a three-match ODI and T20I series.

(The above story first appeared on LatestLY on Nov 22, 2020 08:18 PM IST. For more news and updates on politics, world, sports, entertainment and lifestyle, log on to our website latestly.com).