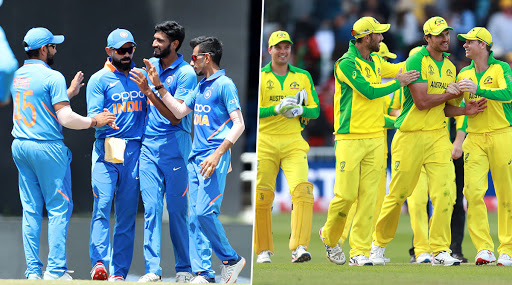 India will take on Australia in 2nd ODI match of the series on January 17, 2020 (Friday) at the Saurashtra Cricket Association Stadium in Rajkot. The visitors were dominating in the opening game as they made easy work of a 256 run chase and defeated India by 10 wickets. In India vs Australia Head-to-Head records, the two sides have met 138 times in ODIs with the Aussies recording 78 wins to the Men in Blues 50, while 10 games ending as no result. In the last five fixtures, Australia have four victories while India have a solitary win to their name. India vs Australia, Cricket Score 2nd ODI Match.

After a crushing defeat in the first match, this game offers India a chance at redemption as they look to get back on level terms in the series. Aaron Finch and David Warner were spectacular with the bat as they both scored centuries while handing India their first 10-wicket loss against Australia. The home side had a poor display with just Shikhar Dhawan being the only batsman reaching the half-century mark while the bowlers were smashed all around the park by the Aussie opening pair. Ahead of the 2nd ODI, we take a look at the results from the last five matches. India vs Australia 2nd ODI 2020: David Warner vs Mohammed Shami, Virat Kohli vs Adam Zampa and Other Exciting Mini Battles to Watch Out for in Rajkot.

India got a reality check in their first ODI match of 2020 as Australia defeated them by 10 wickets. After electing to field first, the visitors were brilliant with the ball as they bowled out the Men in Blue for 255 after India were 134/2 in the 27th over. The Aussie pacers combined for 7 wickets in the clash while the opening batting pair chased the total down without losing their wicket.

This match was played in the 2019 Cricket World Cup and India were too good for the Australian team. The Men in Blue posted a total of 352 runs courtesy of a century from Shikhar Dhawan. After getting to a slow start the Aussies managed to get back in the game through Carey but were unable to get over the line.

Usman Khawaja’s century took Australia to a par score of 273 on a slow Delhi wicket. India got off to a poor start after losing quick wickets as the visitors were relentless with the ball. Bhuvneshwar Kumar and Kedar Jadhav put on an impressive show but couldn’t prevent a 35 run loss.

The opening pair of Shikhar Dhawan and Rohit Sharma stitched up a first-wicket partnership of 193 runs to take India to a total of 358 runs. Usman Khawaja and Peter Handscomb steadied the innings after being reduced to 12-2 and then Ashton Turner played a quick-fire knock of 84 runs to lead the visitors to an important win.

Skipper Aaron Finch and Usman Khawaja set the platform as they stitched up a 193 run stand with the latter scoring a brilliant century. The pacers were brilliant with their effort as Pat Cummins and Jhye Richardson picked up six wickets between them.