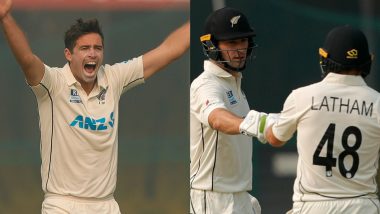 Shreyas Iyer did make the most of his Test debut by scoring a hundred but Tim Southee and the New Zealand openers Tom Latham and Will Young ensured that the Black Caps owned Day 2 at the Green Park International Stadium in Kanpur on Friday, November 26. Iyer, batting overnight on 75*, got to his hundred in the first session itself and etched his name in history, joining the likes of Sourav Ganguly, Sehwag, Gundappa Vishwanath amongst others. But India lost Jadeja at the other end pretty early and from then on, New Zealand sniffed an opening and clawed back into the game in style. The chief architect of their comeback was Tim Southee, who ran through the Indian lower-middle order and tail to end up with five wickets (5/69). In the absence of his bowling partner Trent Boult, Southee showed why his experience is so valuable to the Kiwi attack as India were restricted to 345. Apart from Southee and Kyle Jamieson, spinner Ajaz Patel also ended up with wickets (2/90) as he cleaned up Ravichandran Ashwin (38) and trapped Ishant Sharma for a duck.  Shreyas Iyer Becomes 10th Indian Batsman to Score a Century on Test Debut at Home, Achieves Feat During IND vs NZ Kanpur Test

India were expected to dominate with the ball, given their quality spin bowling attack but they were not able to break the steely resistance by Latham (50*) and Young (75*). The duo played patiently and after surviving a few close calls, they ensured that New Zealand did not lose a wicket to end the second day's play on a high. The spin trio of Ravichandran Ashwin (0/38), Ravindra Jadeja (0/28) and Axar Patel (0/26) proved to be ineffective along with pacers Umesh Yadav and Ishant Sharma. New Zealand ended the day's play at 129/0, trailing India's first innings total by 216 runs. India vs New Zealand Highlights 1st Test 2021 Day 2: NZ 129/0 in 57 Overs, Trail by 216 Runs

Let us take a look at stat highlights of the day's play:

#Shreyas Iyer became the 16th Indian to score a hundred on Test debut.

#The last three Indians to score a century on Test debut are all now from Mumbai, with Iyer joining teammates Rohit Sharma and Prithvi Shaw.

#Tim Southee picked 5/69 to become the first visiting fast bowler to take a five-wicket haul in Kanpur since 1980.

#Tom Latham and Will Young's unbeaten 129-run stand is the third-highest opening partnership for New Zealand in India.

#This was also the first 100+run opening partnership by visiting batsmen in India since Alastair Cook and Haseeb Hameed's 103 in 2016.

India would now aim at getting a breakthrough as soon as possible on the third day with New Zealand trailing by 216 runs. An early wicket can lead to more dismissals and India would hope to put New Zealand under pressure early on.

(The above story first appeared on LatestLY on Nov 26, 2021 05:33 PM IST. For more news and updates on politics, world, sports, entertainment and lifestyle, log on to our website latestly.com).