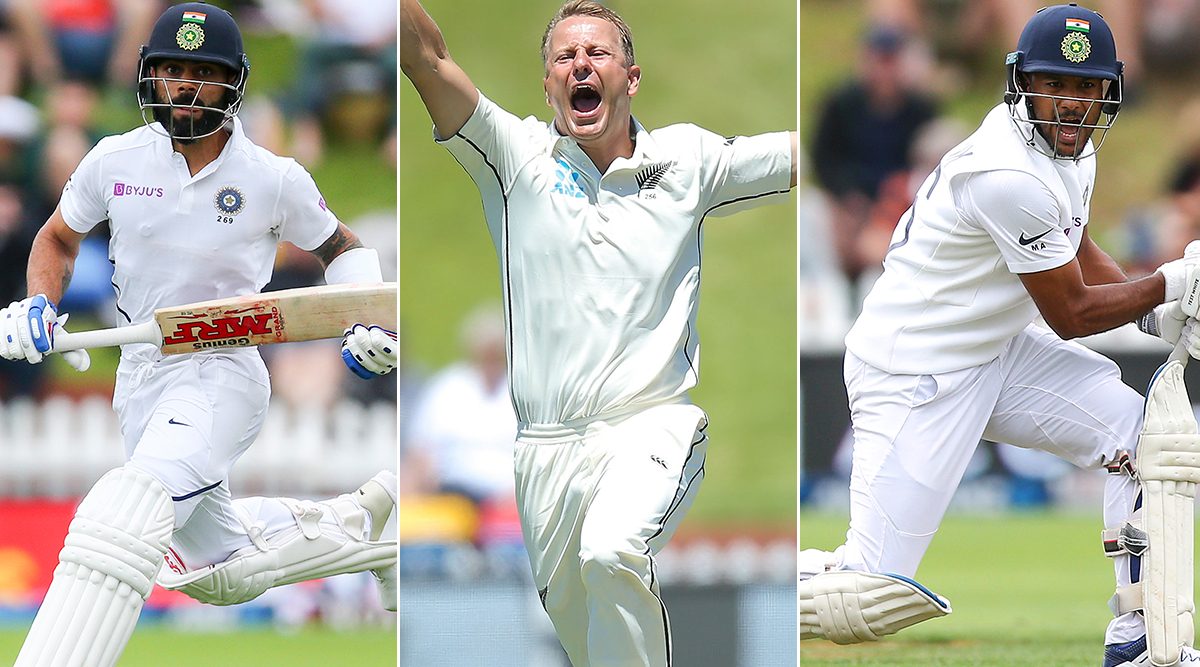 Stakes will be high when India will take on New Zealand in the second and final Test of the series. The match will be played at the Hagley Oval in Christchurch and will get underway on February 29. The Kiwis clinched the opening game of the series by 10 wickets and has a great chance to whitewash the number-one ranked Test side 2-0. On the other hand, Virat Kohli and Co haven’t lost a single series in the ongoing ICC World Test Championship and will eye to extend their good run. Well, both sides consist of players who can turn the game on its head and below, we’ll look at some of them. New Zealand Vs India, Cricket Score 2nd Test Match.

Skipper Kane Williamson shone with the bat in the opening game of the series and his knock of 89 runs in the second innings proved to be match-defining in the end. Other than him, the pace trio of Trent Boult, Tim Southee and Kyle Jamieson breathe with the ball and never allowed the Indian batsmen to settle their feet. For India, veteran pacer Ishant Sharma bagged a five-fer while Mayank Agarwal and Ajinkya Rahane put up a fight with the bat.

The right-handed batsman brilliantly tackled the brand new red-cherry by the Kiwi pacers in the opening game and hence, was one of the shining light for India. Along with being watchful, Agarwal also tends to accumulate runs at a decent pace and the opener is certainly expected to do well in Christchurch. He managed to register a half-century in the previous encounter and will now, eye the three-figure mark.

The Kiwi skipper played the opening Test with an injured thumb but that didn’t restrict him from playing a match-defining knock. He put up a batting master class and scored runs all over the park. Williamson, however, fell 11 runs short of a well-deserved century. Nevertheless, the stalwart enjoys playing at Christchurch and the Indian bowlers must vary him.

The batting juggernaut is going through a rare lean patch at the moment and will aim to get his lost touch back as soon as possible. In the first Test, he seemed vulnerable against the out-swinging deliveries and hence, was dismissed cheaply in both innings. However, the 31-year is known to make stellar comebacks and can well come good in the upcoming game.

The right-arm pacer faced a lot criticism during the limited-overs leg of the tour where he leaked runs at crunch moments. However, he came to his prime in the longest format of the game and rattled the Indian batting line-up at Wellington. The veteran must be high on confidence due to his previous performance and will aim to replicate his heroics once again.

In the latest ICC Test rankings for bowlers, the left-arm pacer went to the second spot and will want to get the top position soon. Wagner missed the opening game due to an injury but is all set to feature in the next game which is certainly not great news for the Indian batsmen. The star bowler is known to use the bouncer to good effect and will surely target the helmets of Indian batsmen.

Indian opener Prithvi Shaw sustained swelling in his ankle during the practice session and is likely to rule out of the next game. In his absence, Shubman Gill might receive his maiden Test cap. For New Zealand, Wagner will definitely make a comeback in the XI and Kyle Jamieson is likely to make way for him in spite of making an impressive debut.