India vs Pakistan, ICC Women’s World T20 2018: A Look at Greatest Ind vs Pak Encounters Ahead of the Clash in West Indies 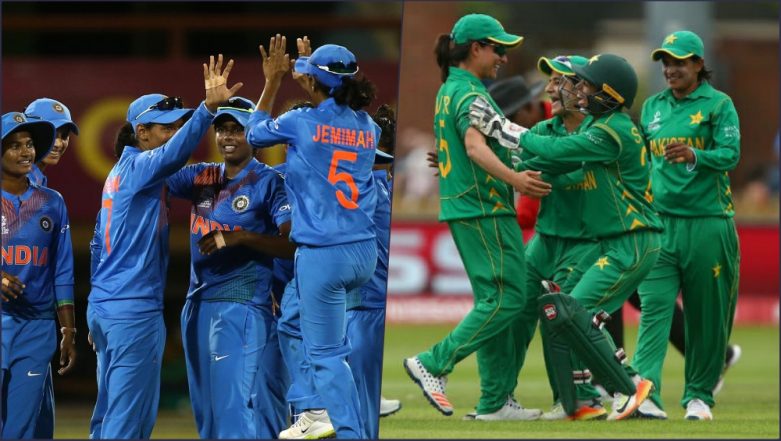 The Indian Women’s Cricket team, high on the back of a comfortable win over New Zealand in their first match of 2018 ICC Women's World Twenty20 are gearing up to face arch-rivals Pakistan. The girls led by Harmanpreet Kaur dominated the Kiwis in every department and skipper’s hundred was icing on the cake. Opponents Pakistan crashed to a 52-run defeat at the hands of Australia, and they will be itching to go out and win a game. Like any Indo-Pak contest, this game is generating quite a buzz and fans will hope the two teams live up to the billing. Before the two teams walk onto the Guyana pitch and get embroiled in the battle, let us walk down the memory lane and look at some great encounters between them. India vs Pakistan, Women's World T20 2018 Match Preview: Dominant IND Face Arch-Rivals PAK in the West Indies.

The two teams met in the 2018 Asia Cup T20 at the Kinrara Academy Oval in Kuala Lumpur where the India Women romped through an easy win. Pakistan won the toss and on a dust track elected to bat first but could muster up a meagre total of 72, which it managed for the loss of seven wickets. Ekta Bisht was the pick of the bowler for India with figures of 3/14. In reply, the Indian girls chased down the score without breaking much sweat. Smriti Mandhana’s patient 38 off 40 balls was enough for India to manage a seven-wicket win. India won by seven wickets.

The Bangkok crowd was treated to a pulsating Indo-Pak women’s game in the 2016 edition of Asia Cup T20. The Pakistan batswomen were poor in their allocated twenty overs and needed Nain Abidi’s unbeaten 37 to reach 97/7. But what they lacked in batting, they made up in their bowling with some decent spells most notably from Sadia Yousuf who took two wickets in her 4 overs. Harmanpreet Kaur played a composed inning of 26* to take India home with four bowls remaining. India won by five wickets.

India was the host nation the 2016 edition of the World T20 and played Pakistan in a Group B clash in Delhi. Batting first India could not break the shackles as it posted a below-par 96/7 in the first innings. V Krishnamurthy played a crucial knock of 24 runs off 19 balls to help India put up something to fight for. Pakistan began their chase well and reached 48/2 before losing four quick wickets. They were 77/6 when DL method was adopted to declare them winners. Pakistan won by 2 runs (D/L Method).

The Indian women’s team won a very close game in Sylhet, Bangladesh thanks to some fine bowling from Soniya Dabir who picked up 3/14. Earlier India batting first put up 106/7 on the board captain Mithali Raj scoring 39. The game was marred in controversy with the Indian skipper complaining of over the board sledging by the Pakistani team during her batting to the match referee after the match ended in India’s favour. India won by 6 runs.

Another one of the typical India Pakistan low soring T20 game which went Pakistan’s way thanks to some shoddy Indian batting. On the turning wicket of Galle, Pakistan scored 98/9 in the first innings which was always going to be a difficult task to chase down. Skipper Sana Mir’s led from the front with a crucial 26 and then made some good bowling changes in the Indian innings to secure a one-run victory for her side. India never got started in the game, and it was only when Jhulan Goswami came on to bat that India looked any good in the chase. India needed 14 off the last over but could only manage 12 runs. Pakistan won by 1 run.

These games show the two teams always fight till the very end against each other and it is often the fine margins that separate them. The fans will be hoping to their side do not test their nerves and can win with ease.