India ended day one of the Centurion Test in a comfortable position with 273/3 on board. KL Rahul and Ajinkya Rahane were batting on 122 and 40 respectively when day's play ended. 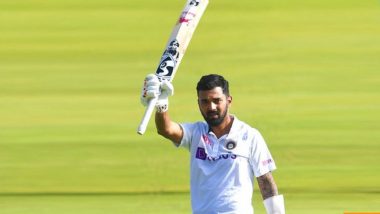 A sublime century from KL Rahul helped India dominate day one of the Boxing Day Test at the SuperSport Park. At stumps, India are 272/3 in 90 overs with Rahul (batting 122) and Ajinkya Rahane (batting 40) at the crease on a day that totally belonged to the visitors. Captain Virat Kohli began the final session with a flick through square leg off Keshav Maharaj. Kagiso Rabada troubled a bit but Kohli came forward and unfurled his cover drive. Rahul too was troubled by Rabada but managed to caress a drive through extra cover. Rahul then went on to smack Maharaj for a pulled four through mid-wicket, followed by dancing down the pitch to hit a six over long-on and enter the 90s. India vs South Africa 1st Test 2021 Highlights, Day 1.

Lungi Ngidi bowled seven consecutive dot balls to Kohli and on the eighth ball, Kohli in a bid to break free chased a delivery wide outside the off-stump and gave an easy catch to Wiaan Mulder at first slip. Rahane was off the mark on his second ball, creaming a Ngidi half-volley through covers. Rahane began to deal in boundaries, slicing Ngidi through off-side, flicking Marco Jansen through mid-wicket, cutting off backfoot through backward point off Maharaj, and punching off backfoot through over off Mulder.

# Cheteshwar Pujara now has most ducks (9) for India at No.3 in Test cricket.

# 117 between KL Rahul and Mayank Agarwal is now the third highest opening stand for India in South Africa in Tests.

# KL Rahul now has a century in all countries he has played Tests in.

After reaching his hundred, Rahul upper-cut Jansen over the slip cordon. Rahane, on the other hand, leaned into a square drive off Jansen and nailed one along the ground pull on a bouncer from Rabada through backward square leg.

(The above story first appeared on LatestLY on Dec 26, 2021 09:41 PM IST. For more news and updates on politics, world, sports, entertainment and lifestyle, log on to our website latestly.com).