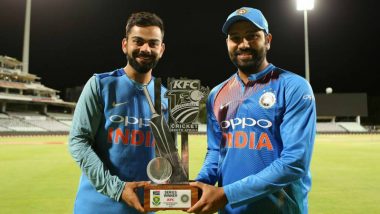 New Delhi, Apr 2: Six companies, including conglomerates such as Star, Sony, and Jio along with digital majors Facebook and Google, will bid for media rights for India's bilateral cricket series at home as BCCI is set to conduct its first ever e-auction tomorrow in Mumbai. The bidding process will be a marked departure from BCCI's conventional closed bid auction model (sealed envelope process) after the Committee of Administrators (CoA) felt that the online bidding is far more transparent method for competitive price discovery.

The media rights will be for a period of five years from April 2018 to March 2023. The BCCI is selling media rights for three specific categories --i) the Global TV Rights plus Rest of World (ROW) Digitals Rights package, ii) Indian sub-continent Digital Rights package and iii) Global Consolidated Rights package.

For 2018-19 season, the per- match value for the global TV and ROW Digital Rights is Rs 35 crore, Rs 8 crore for Indian sub-continent while Rs 43 crore will be the starting bid for the Global Consolidated Rights.

From the period between 2019-2023, the per match value package is Rs 33 crore, Rs 7 crore for Indian Subcontinent and Rs 40 crore for the Global Consolidated Rights.

India are expected to play 22 Tests, 42 ODIs and 38 Twenty20 Internationals at home in the next five-year cycle. Star, Sony and Jio are expected to compete hard for the TV broadcast rights along with Yupp TV while Facebook and Google will be battle for the Digital Rights Package.

With Star, Sony and Jio also expanding their presence in the digital market, it won't be surprising if there are big bids for the Global Consolidated Rights package (which includes both i) and ii)).

Star also has ICC tournaments such as World T20 (men and women), men's and women's 50-over World Cup along with the Champions Trophy. "It will be interesting how desperate Star will be now that they have acquired IPL media rights. Sony, on the other hand will be more desperate for the India Rights as Indian team's media rights are important for any broadcaster's survival. Jio can be the dark horse as winning even the TV Rights will announce their big-time arrival in broadcast market," a senior BCCI official tracking the event told PTI.

Facebook had placed a whopping bid of Rs 3900 crore (USD 600 million) for exclusive digital rights of IPL but lost to Star who acquired the rights with a consolidated bid.

While the closed bidding is a one-time process, the e-auction will allow the companies to file incremental bids (with fixed slabs) after each round till competitors pull out of the race. Technically, the e-auction may spill over to the next day if the bidding process is not completed by 6 pm tomorrow.

Sony and Star had expressed unhappiness on BCCI keeping the minimum bid price same irrespective of the stature of opposition. However the board has not budged from its stance as they feel it's a kind of pressure tactic employed by potential broadcasters.

"There are 80 percent matches in this five-year cycle in which India will counter big teams and broadcasters will recover their money. The 20 percent of the matches against weaker teams wouldn't affect their earnings," a senior office bearer said.