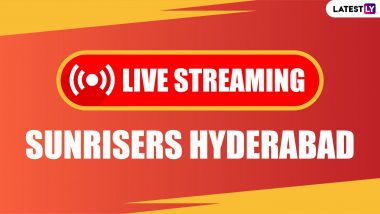 Live Streaming of IPL 2020: Sunrisers Hyderabad (SRH) is an unpredictable team in the Indian Premier League (IPL). They can surprise any team with their unbelievable bowling and batting. Ever since its arrival in the year 2013, SRH has put up a decent performance year after year and they even went on to win IPL 2016 under the captaincy of David Warner. In the last two seasons, Sunrisers was led by Kane Williamson. however this year, the orange army will have Warner as its captain. Meanwhile, you have arrived at the right platform, if you are looking for Sunrisers Hyderabad live streaming online for IPL 2020 on Hotstar and live telecast on Star Sports or Star Sports 1 Telugu. SRH Team Profile for IPL 2020: Sunrisers Hyderabad Squad in UAE, Stats & Records and Full List of Players Ahead of Indian Premier League Season 13.

In IPL 2019, Sunrisers Hyderabad managed it to the playoff and finished at the fourth spot. David Warner won the orange cap in IPL season 12 where he made 692 runs from 12 matches with an average of 69.20 and strike rate of 143.86. Sunrisers Hyderabad has managed to make it to the playoff thrice, runner up in the year 2018 and champion in 2016. The Orange army comprises of some of the fine cricketers from domestic as well as overseas. Kane Williamson Joins Sunrisers Hyderabad in the Nets, Team Welcomes ‘Blizzard in the Desert’ Ahead of IPL 2020 (Watch Video & See Pics)

Sunrisers Hyderabad consists of fine cricketers like Kane Williamson, Jonny Bairstow, Rashid Khan, Bhuvneshwar Kumar, Manish Pandey to name a few. David Warner who will lead the orange army in IPL season 13 led the franchise to victory in IPL 2016. Now let us take a look at the live streaming details of Sunrisers Hyderabad in IPL 2020.

Sunrisers Hyderabad fans can view live action of all SRH matches in IPL season 13 on Star Sports channels. Star Sports is the official broadcaster of Indian Premier League (IPL) in India and will be live telecasting all the matches for IPL fans on its channels. IPL 2020 matches will be available on Star Sports 1 Telugu as well, so SRH fans can enjoy the games in their regional language. Those of you who cannot catch up with live matches on Star Sports can watch online on Disney+ Hotstar which will be live streaming all the IPL 2020 matches, including all SRH matches, online for fans in India. Meanwhile, fans from the USA Can watch live streaming of SRH matches in IPL 2020 on Hotstar USA.

Sunrisers Hyderabad will play its first game against Royal Challengers Bangalore (RCB) on September 21, 2020, at Dubai International Stadium. Stay tuned with LatestLY for more updates and news from IPL 2020.

(The above story first appeared on LatestLY on Sep 21, 2020 07:49 PM IST. For more news and updates on politics, world, sports, entertainment and lifestyle, log on to our website latestly.com).