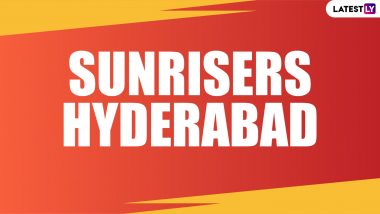 Sunrisers Hyderabad (SRH) since its arrival in Indian Premier League (IPL) in the year 2013 has put up a decent performance. SRH has even won IPL title once in the year 2016 under the captaincy of David Warner. The team consist of experienced players like Kane Williamson, Bhuvneshwar Kumar, Wriddhiman Saha, Rashid Khan to name a few. SRH has made it to the final twice in IPL, first in the year 2016 where they defeated Royal Challengers Bangalore in the final and second in the year 2018, where they lost to Chennai Super Kings. Meanwhile, you have arrived at the right platform, if you are looking for David Warner led SRH team profile, squad, stats, record and a full list of players for upcoming IPL season 13 which is scheduled to take place in UAE. SRH Squad for IPL 2020 in UAE: Check Updated Players' List of Sunrisers Hyderabad Team Led by David Warner for Indian Premier League Season 13.

In the previous season, Sunrisers Hyderabad made it to the playoff where they lost to Delhi Capitals in their eliminator match. SRH won six out of fourteen games in IPL 2019. In IPL 2018 and 2019, the orange army was led by Kane Williamson. With inclusion of Mitchell Marsh and Fabian Allen the SRH side looks quite competetive. Also, SRH have a world class T20 player like Rashid Khan who is in great form. IPL 2020 Captains List: From MS Dhoni to Virat Kohli, Check Out Skippers of All 8 Teams in Indian Premier League 13.

With world class pacers like Bhuvneshwar Kumar, Khaleel Ahmed and fine batsmen like Jonny Bairstow, David Warner and an experienced all-rounder like Mohammad Nabi, David Warner SRH side can back themselves to win IPL title for the second time.

Sunrisers Hyderabad has played 108 matches, in which the franchise has won 57 games and faced defeat in 49 games. SRH has a win percentage of 53.70.

Most Runs and Wickets For SRH

The current skipper of SRH David Warner is the highest run scorer for the franchise with 3271 runs to his name from 71 matches. The leading wicket-taker for Sunrisers Hyderabad is Bhuvneshwar Kumar with 109 wickets from 86 matches.

(The above story first appeared on LatestLY on Sep 01, 2020 03:00 PM IST. For more news and updates on politics, world, sports, entertainment and lifestyle, log on to our website latestly.com).