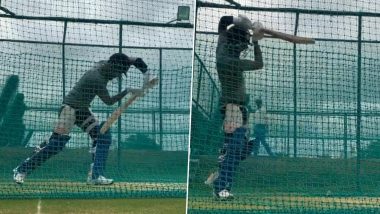 With the 2020 edition of the Indian Premier League (IPL) set to get underway on September 19 in UAE, players from all around the world are raring to make a mark in the tournament and Kings XI Punjab (KXIP) captain KL Rahul is no exception. Recently, the swashbuckling batsman took to his Instagram page and shared a video from his practise session. In the clip, Rahul can be seen hitting the nets hard and is middling the ball with perfection. Well, the Karnataka-born batsman looks all set to showcases his blitzes with the bat and the bowlers must be aware of the fact. KXIP Squad for IPL 2020 in UAE: Check Updated Players' List of Kings XI Punjab Team.

“Music to my ears @kxipofficial,” wrote the wicket-keeper batsman while sharing the video on Instagram. Rahul has been the cornerstone of KXIP batting line-up in the last couple of seasons and his record is also staggering. Also, the second-ranked T20I batsman has played some spectacular knocks for Team India in white-ball cricket. This time, however, Rahul will also handle the mantle of leadership and it will be interesting to see if he can thrive this challenge or not. Meanwhile, let’s look at his post. KL Rahul Shares Old Picture With Kings XI Punjab Teammates.

Music to my ears 🏏 @kxipofficial

Despite having some big names in the side, KXIP haven’t been able to lift the IPL title even once in the last 12 seasons. Nevertheless, KL Rahul and Co will be determined to end their drought in UAE. Along with Rahul, the Punjab-based team also have the services of Mohammed Shami, Glenn Maxwell, Chris Gayle, Nicholas Pooran and Sheldon Cottrell who are the proven stars of the shortest format of the game.

(The above story first appeared on LatestLY on Aug 10, 2020 06:46 PM IST. For more news and updates on politics, world, sports, entertainment and lifestyle, log on to our website latestly.com).