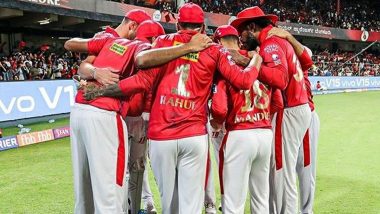 Cricket lovers all around the world are waiting for the start of Indian Premier League (IPL) 2020 and KL Rahul is no different. The newly-appointed Kings XI Punjab (KXIP) recently took to Instagram and shared an old picture in which he can be seen discussing with his teammates in a hurdle. The message is absolutely clear that Rahul is ready to showcase his blitzes in the marquee tournament and the opposition teams must brace themselves. In the past year, the Karnataka-born batsman enjoyed a sensational run in white-ball cricket and he’ll like to extend his great run in the gala tournament too. Kings XI Punjab Relive Hardik Pandya and KL Rahul’s Jersey-Swap Moment.

In fact, Rahul’s performance in the previous two editions of the tournament was also nothing less than sensational. However, his efforts weren’t enough to guide his side even to the playoffs. Nevertheless, in the 2020 IPL auctions, KXIP bagged the services of several prominent players who can change Punjab’s fate this time around. Sheldon Cottrell, Jimmy Neesham and Chris Jordan have been included to the KXIP team and they’ll eye to make a mark. Meanwhile, let’s look at KL Rahul’s latest Instagram post. KL Rahul Posts Masked Photo, Says 'Can You Tell I’m Smiling.'

With the tournament taking place in UAE due to the COVID-19 crisis in India, Rahul and Co will have a different challenge in front of them. The pitches are Sharjah, Abu Dhabi and UAE are known to favour the spinners while the boundaries are also on the larger side. Nevertheless, just like all the times, KXIP are expected to reach the base by the second or third week of August and they’ll like to assess the conditions before the start of the tournament.

(The above story first appeared on LatestLY on Aug 05, 2020 04:22 PM IST. For more news and updates on politics, world, sports, entertainment and lifestyle, log on to our website latestly.com).