IPL 2021: Devdutt Padikkal, Jhye Richardson and Other Youngsters To Watch Out For in Indian Premier League Season 14

IPL 2021 is scheduled to be played between April 9, 2021, and May 30, 2021, with six cities hosting India’s premier T20 tournament. Kolkata, Delhi, Bangalore, Ahmedabad, Chennai and Mumbai will host Indian Premier League 2021 behind closed doors for the initial stage. 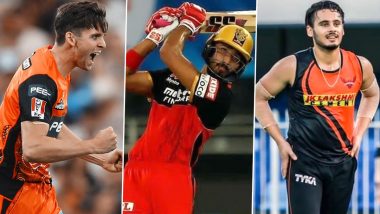 The Indian Premier League has always been a platform for youngsters to showcase their talent on the grandest stage. IPL has produced many superstars of the cricketing world in recent years as many youngsters after impressing in the cash-rich league have gone on to represent their country at the international level as well. So ahead of IPL 2021, we take a look at five youngsters who can have a huge impact in the upcoming season. Harishankar Reddy Quick Facts: All You Need To Know About the 22-Year-Old CSK Pacer Who Dismissed MS Dhoni During Training.

IPL 2021 is scheduled to be played between April 9, 2021, and May 30, 2021, with six cities hosting India’s premier T20 tournament. Kolkata, Delhi, Bangalore, Ahmedabad, Chennai and Mumbai will host Indian Premier League 2021 behind closed doors for the initial stage and in order to avoid home advantage, no team is scheduled to play at their home venue. IPL 2021: Kolkata Knight Riders Begin Quarantine For Training Camp.

Top Youngsters To Watch Out in IPL 2021

The Karnataka cricketer was sensational in his maiden Indian Premier League campaign (IPL 2020) but the question remains of whether he can replicate that feat. The 20-year-old scored 472 runs, including five half-centuries in 14 innings in the previous edition and will head into IPL on the back of a sensational domestic season. He scored 737 runs in Vijay Hazare Trophy 2021 at an average of just below 150 and will be aiming to continue that run.

The 24-year-old was one of the very few bright sparks for Chennai Super Kings in a dismal IPL 2020 campaign, scoring 204 runs in six games at an average of 51. Gaikwad’s impressive performances saw him retained by CSK for IPL 2021 and will hope that the Maharashtra batsman can move up to the next level this season after some brilliant performances in the domestic circuit.

The 24-year-old Australian pacer hasn’t yet played in the IPL but comes in with a great reputation. Richardson was bought by Punjab Kings for INR 14 cr during the player auction. The Western Australia speedster has a great record in the T20 format and is known for his low economy and ability to take wickets in the powerplay. Richardson has taken 13 wickets in 14 games for Australia and has registered 69 wickets in 53 matches for Perth Scorchers in BBL

The 22-year-old will have big responsibilities on his shoulders, leading the Punjab Kings bowling attack after impressing in IPL 2020. In eight games, Arshdeep Singh took nine wickets, with an economy of just over nine. Singh was one of the consistent performers for Punjab in a topsy turvy season, showcasing his talent in many tight games.

The power-hitter from Jammu & Kashmir will be one of the most exciting prospects to look forward to in IPL 2021. The 19-year-old showed a glimpse of his quality in the previous edition but wasn’t able to conjure up a match-defining inning, something SRH will be expecting from him more often this season.

(The above story first appeared on LatestLY on Mar 23, 2021 04:56 PM IST. For more news and updates on politics, world, sports, entertainment and lifestyle, log on to our website latestly.com).