IPL 2021: Eoin Morgan and Other Foreigners Who Will Be the Four Overseas Players in the KKR Playing XI

Shakib Al Hasan and Harbhajan Singh were two experienced buys at the IPL 2021 players auction. Shakib makes his return to the KKR squad after three years away from the side. Harbhajan opted out of IPL last year and was released by Chennai Super Kings. Both are valuable additions to the side but could struggle to enter the playing XI. 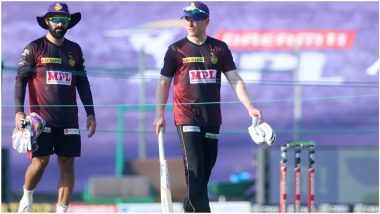 Kolkata Knight Riders will begin their IPL 2021 journey against Sunrisers Hyderabad on April 11. KKR, a two-time Indian Premier League champion, finished fifth last season and failed to make the playoffs despite ending on the same number of points as Royal Challengers Bangalore (RCB), who finished fourth. After a disappointing IPL 2020, KKR released Tom Banton, Chris Green and Siddesh Lad among others but retained their core. The franchise entered the IPL 2021 players auction with the joint lowest budget (Rs 10.75 Crore) among all teams and signed eight players for the new season. Will Harbhajan Singh Be Part of KKR First-Choice Playing XI in IPL 2021?

Among them, Shakib Al Hasan and Harbhajan Singh were two experienced buys. Shakib makes his return to the KKR squad after three years away from the side. The Bangladesh all-rounder was part of both 2012 and 2014 IPL winning teams at KKR before he was bought by Sunrisers Hyderabad in 2017. Harbhajan opted out of IPL last year and was released by Chennai Super Kings ahead of the IPL 2021 players auction. Shakib was signed for Rs 3.2 Crore while Harbhajan was picked for his base price of Rs 2 Cr. Both are valuable additions to the side but could struggle to enter the playing XI. KKR Likely Playing XI in IPL 2021: Check Out Kolkata Knight Riders’ Predicted First Choice Line-Up for Indian Premier League Season 14.

Eoin Morgan – The England captain is also the KKR skipper and is a mandatory inclusion in the team. Morgan was appointed the Kolkata Knight Riders captain midway last season after former skipper Dinesh Karthik stepped down owing to poor form with the bat. Morgan was KKR’s second-highest run-scorer last season and amassed 418 runs in 14 matches but managed only one half-century.

Shakib Al Hasan – If he plays, Shakib Al Hasan will be a straight swap for Sunil Narine in the KKR playing XI. The Bangladeshi all-rounder returns to the IPL after sitting a season out during which he served a one-year ban from international cricket for failing to report a corrupt approach. Shakib is a better batsman than Narine and has been more economical in recent times although Narine has had a greater impact at the IPL. But the West Indian has struggled with his bowling action. Shakib is likely to start ahead of Narine in the opening couple of matches.

Andre Russell – The big-hitting West Indian had a nightmare last season and could play only 10 matches. Russell struggled to make the same impact he has had with the bat in the past and could score only 117 runs and picked six wickets. But despite enduring a poor time last season, Russell is one of KKR’s key players and is likely to be the first name in the team sheet.

Pat Cummins – Cummins was bought for a record Rs 15 Crore last season but the Australian pacer failed to strike regularly. Cummins went five games without picking a wicket last season. He eventually ended IPL 2020 with 12 wickets, four of which came in the final league stage game against Rajasthan Royals. Cummins was more influential with the bat and even scored a half-century. He is sure to be one of the four overseas players in the side and will want to give KKR the early breakthrough.

(The above story first appeared on LatestLY on Apr 02, 2021 06:11 PM IST. For more news and updates on politics, world, sports, entertainment and lifestyle, log on to our website latestly.com).