Ahead of the IPL 2021 player auction, KKR released Tom Banton, Chris Green, Siddesh Lad, Manimaran Siddharth and Nikhil Naik and entered the auction with a purse of Rs 10.75 Crore, joint lowest among all eight teams. But despite a low budget, the franchise managed to sign Shakib A Hasan, Ben Cutting, Harbhajan Singh and Karun Nair among others. 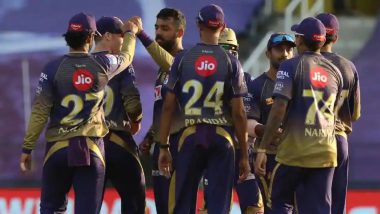 After a disappointing outing in IPL 2020, Kolkata Knight Riders will search for a third IPL title when season 14 of the Indian Premier League gets underway on April 9. KKR will begin their IPL 2021 journey against Sunrisers Hyderabad two days later. The Eoin Morgan-led side finished fifth last season and failed to make the IPL playoffs. Morgan was made the franchise captain midway through last season after Dinesh Karthik stepped down following an inconsistent run. Under Morgan, KKR won three and lost four games and finished behind the fourth-placed Royal Challengers Bangalore (RCB) due to a poor run-rate. IPL 2021: Shubman Gill, Andre Russell and Other KKR Players To Watch Out for in Indian Premier League Season 14.

Ahead of the IPL 2021 player auction, KKR released Tom Banton, Chris Green, Siddesh Lad, Manimaran Siddharth and Nikhil Naik and entered the auction with a purse of Rs 10.75 Crore, joint lowest among all eight teams. But despite a low budget, the franchise managed to sign Shakib A Hasan, Ben Cutting, Harbhajan Singh and Karun Nair among others. The signings of these top players and experienced campaigners will give the KKR management a headache heading into the IPL 2021 season. So ahead of the start of IPL 2021, we take a look at the KKR likely playing XI for IPL 2021. ‘Time To Switch Gears!’ KKR Ask Fans for Suggestions on Colours for New Jersey Ahead of IPL 2021.

Openers – Shubman Gill, Nitish Rana, Rahul Tripathi, Karun Nair and even Sunil Nair can open the batting for Kolkata Knight Riders. But Gill and Rana, who were the designated opening pair for KKR last season after expected to retain their place. Gill finished IPL 2020 as the highest run-getter for KKR last season and hit 440 runs in 14 matches, which included three half-centuries. He has now become an India regular in Test and One-Day internationals. Nitish Rana also had a decent IPL season last term and scored 352 runs. Like his opening partner, Rana also hit three half-centuries.

Middle-Order – Shakib Al Hasan makes his return into the KKR fold after starring for them in the 2012 and 2014 title-winning campaigns. He is likely to bat at three if he is included in the playing XI. With only four overseas players allowed and Morgan a mandatory inclusion given he is the skipper and likely to bat four, Shakib’s inclusion in the KKR playing XI could force the team to leave out Sunil Narine.

Shakib will bat at three with Morgan, Dinesh Karthik and Andre Russell to follow. Karthik will keep wickets and will play as the finisher, a role he successfully carried out for the Indian team in T20Is, for the team.

All-Rounders – KKR could play Pawan Negi at seven as their first bowling all-rounder. Negi, once a hot prospect in the IPL, has fallen down the radar. He spent the last four seasons at RCB but did not get a game last season. Pat Cummins will be the other bowling all-rounder in the side.

Negi is handy with his left-arm spin, can tonk the ball the distance and is also an outstanding fielder. Cummins was signed for Rs 15 Crore last season but failed to show the impact he has made for Australia across formats. He picked 12 wickets and scored 146 runs with the bat. KKR will want more from their strike bowler this season.

Bowlers – Varun Chakravarthy and Prasidh Krishna are sure to be in the playing XI. The latter impressed in his debut for India in the ODIs against England last week. Chakravarthy could have also made his India debut but missed the tour of Australia due to a shoulder injury and was not included in the T20Is against England after failing a fitness test.

Chakravarthy picked 15 wickets last season and was one of the emerging players of the season. Kamlesh Nagarkoti is the other bowling specialist in the side. Nagarkoti is also handy with the bat lower down the order. The 21-year-old Rajasthan pacer picked five wickets in 10 matches last season. Shivam Mavi, another India U-19 star, is also an option.

(The above story first appeared on LatestLY on Mar 31, 2021 01:24 PM IST. For more news and updates on politics, world, sports, entertainment and lifestyle, log on to our website latestly.com).