Will Harbhajan Singh Be Part of KKR First-Choice Playing XI in IPL 2021?

Harbhajan has been a part of IPL since the inception of the tournament in 2008. For the first ten years, he served Mumbai Indians and lifted three titles with the Men in Blue and Gold. The talismanic spinner then represented MS Dhoni’s Chennai Super Kings for two years and did a decent job in the yellow jersey as well. 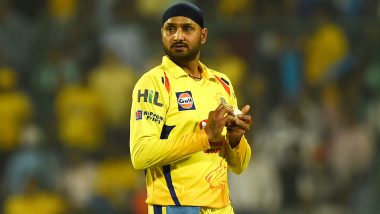 Many eyes will be on Harbhajan Singh, who will ply his trade for Kolkata Knight Riders in VIVO Indian Premier League (IPL) 2021. KKR bought the veteran Indian off-spinner for his base price of INR 2 crore at the auction event, and his addition has indeed provided volume to the side’s spin-bowling department. The 40-year-old has a plethora of experience in T20 cricket, and his records speak volumes of his prowess. Harbhajan can restrict the run flow in the middle overs, and his happy knack of taking wickets makes him a great asset. However, will Harbhajan be a part of KKR’s first-choice playing XI? IPL 2021 Schedule in PDF for Free Download: Get Indian Premier League 14 Venues, Full Time Table, Fixtures and Match Timings in IST.

Harbhajan has been a part of IPL since the inception of the tournament in 2008. For the first ten years, he served Mumbai Indians and lifted three titles with the Men in Blue and Gold. The talismanic spinner then represented MS Dhoni’s Chennai Super Kings for two years and did a decent job in the yellow jersey as well. Adding onto that, the four-time IPL winner has scalped 150 wickets in 160, fifth-most for anyone in the tournament’s history.  A player of such utility isn’t likely to warm the benches. However, that can happen with Harbhajan in the forthcoming tournament. Harbhajan Singh Wants to Enjoy His Stint with KKR, Says ‘I Have Nothing to Prove to Anyone.

Will Harbhajan Singh Be Part of KKR’s First-Choice Line-up?

Despite Harbhajan’s spectacular record, lack of game time might keep him away from the initial line-up. The spinner had pulled out of due to IPL 2020, citing personal reasons. He neither has been active in the domestic circuit since the past few years. Hence, KKR spinner Eoin Morgan and the team management might not be keen to include him in the side. KKR Likely Playing XI in IPL 2021: Check Out Kolkata Knight Riders’ Predicted First Choice Line-Up for Indian Premier League Season 14

Moreover, KKR don’t have any shortage of quality spinners. In Shakib Al Hasan and Sunil Narine, Kolkata not only have two brilliant spin-bowling all-rounders who can contribute in the batting department as well. Among Indian bowlers, KKR have Kuldeep Yadav and Varun Chakravarthy, who are around the national team. Not to forget Pawan Negi, who brings a variety with his left-arm spin. He’s also a handy batsman lower down the order.

Hence, it’s highly unlikely that Harbhajan will take the field immediately. With so many options among spinners, there are also possibilities of the veteran warming the benches throughout the season. Having said this, the first-choice spinners will be on their toes with a talisman like Harbhajan waiting for his chances.

Meanwhile, KKR, who finished fifth in the team standings last season, will kick-start their IPL 2021 campaign against Sunrisers Hyderabad on April 11 at the MA Chidambaram Stadium in Chennai.

(The above story first appeared on LatestLY on Apr 02, 2021 05:08 PM IST. For more news and updates on politics, world, sports, entertainment and lifestyle, log on to our website latestly.com).