IPL 2021: Shubman Gill, Andre Russell and Other KKR Players To Watch Out for in Indian Premier League Season 14

The franchise will look to their senior players to lift their performance and take the team to a title-winning season. KKR have a lot of T20 superstars in their side and need all of them to perform at their best to lift a third IPL title. The franchise signed Harbhajan Singh, Ben Cutting and Shakib Al Hasan at the auction to bolster their squad. 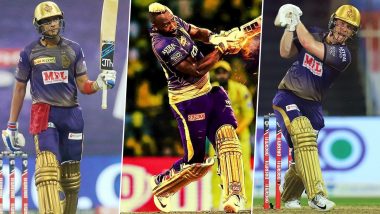 After a disappointing season, last IPL, Kolkata Knight Riders (KKR) will want to make the IPL playoffs this season and also end their six-year trophy drought. KKR last won the IPL title in 2014, the second of their two titles, and have since failed to reach the final even once in the last six seasons. In three of those six seasons, including the last, KKR have failed to make the playoffs. They finished fifth last season after losing three of their last five league stage games. A lot of that disappointment was down to KKR’s senior players underperforming. IPL 2021: Devdutt Padikkal, Mohammed Azharuddeen and Other Uncapped Stars To Watch Out For in Indian Premier League Season 14.

The franchise will once again look to their senior players to lift their performance and take the team to a title-winning season. KKR have a lot of T20 superstars in their side and need all of them to perform at their best to lift a third IPL title. The franchise released five players ahead of the IPL 2021 players’ auction and then signed the likes of Harbhajan Singh, Ben Cutting and Shakib Al Hasan at the auction to bolster their squad. Ahead of IPL 2021, take a look at five KKR players to watch out for in season 14 of the Indian Premier League. IPL 2021: Can Glenn Maxwell End Virat Kohli-Led RCB’s Drought in Indian Premier League?

Elevated as the Kolkata Knight Riders captain mid-way through last season, Morgan was one of KKR’s best batsman last season. Among the inconsistency from the others, Morgan’s runs kept KKR in the playoffs race until their final game. He was also one of only two KKR batsmen to cross the 400-run mark last IPL, his best outing in seven seasons in the Indian Premier League. Morgan scored 418 runs in 14 matches in IPL 2020 but managed only one 50+ score. KKR will want more from their skipper both with the bat as well as their leader this season.

The mystery spinner was the outstanding player for KKR last season. Initially bought in as a cover for Kuldeep Yadav, Chakravarthy was one of the emerging cricketers in IPL last season. He picked up 17 wickets in 13 matches at an economy of 6.84 and finished as the tournament’s ninth-highest wicket-taker. He was also the only bowler in IPL 2020 to take a five-wicket haul. Chakravarthy achieved his best figures when he took 5/20 against Delhi Capitals.

Chakravarthy was also Kolkata Knight Rider’s highest wicket-taker in the IPL last season. His IPL performances earned the 29-year-old a maiden India call-up. But Chakravarthy was first ruled-out from the Australia T20I series due to a shoulder injury while he failed the fitness test ahead of the T20I series against England and missed out on another opportunity to make his India debut.

Removed from captaincy mid-season by the KKR management last year after poor performances and inconsistency, Dinesh Karthik looked lost and struggled to produce the runs. He could manage only 169 runs in 14 matches and averaged 14.08 in IPL 2020. A poor IPL also resulted in Karthik losing his place in the Indian T20I side. He had a decent Syed Mushtaq Ali Trophy with Tamil Nadu and led the side to a title win earlier this year. Karthik will most likely play the finisher’s role at KKR this season and will need to finish games for his side.

The big-hitting West Indies all-rounder has been KKR’s most important player for the last five seasons. He had his worst season in KKR colours last year. Russell managed only 117 runs in 10 matches, some of which he played battling injuries. Russell struggled with an arm injury throughout last season and his struggles resulted in KKR failing to make the playoff. But even as he struggled with the bat, Russell was excellent with the ball and picked up six wickets.

A possible future KKR captain and a star in waiting, Shubman Gill had a decent IPL season last year. But his failure to shift gears when required was a massive issue for him as well as the team. Gill scored 440 runs in 14 games for Kolkata Knight Riders but that came at a strike rate of 117.96. Gill hit only nine sixes in the entire IPL season last year and scored at an average of 33.84. KKR will need him to fire at the top of the order this season.

(The above story first appeared on LatestLY on Mar 24, 2021 07:03 PM IST. For more news and updates on politics, world, sports, entertainment and lifestyle, log on to our website latestly.com).