Jamie Overton, England Batter, Says 'We Have a Great Chance of Making a Clean Sweep of Test Series Against Kiwis'

England cricketer Jamie Overton believes the last session on Day 3 had put his side in the 'box seat' to make a clean sweep of the three-Test series against New Zealand here. 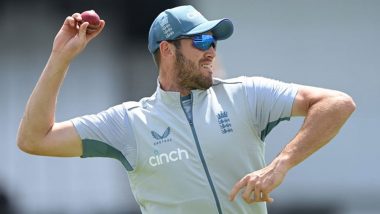 Headingley, June 26: England cricketer Jamie Overton believes the last session on Day 3 had put his side in the 'box seat' to make a clean sweep of the three-Test series against New Zealand here. Not only did Overton score a polished 97 off 135 balls to give the hosts a slender 31-run first-innings lead, he then bowled nine overs and took a crucial wicket to put the Black Caps in trouble at 168/5 at stumps on Day 3. The tourists only have a narrow 137-run lead with just five wickets in hand, making the Ben Stokes-led England firm favourites to make a clean sweep of the three-Test series. ENG vs NZ, 3rd Test 2022: England Restrict New Zealand Progress With Four Late Wickets.

"That last session put us right in the box seat. We're in a great position going into the fourth day. If we can get those two early (Daryl Mitchell and Tom Blundell), we're in a great place to win the game," Overton was quoted as saying by Daily Mail. Overton, who rattled the Black Caps by removing opener Tom Latham for 76 after tea, said it was a "great feeling" to take the wicket of the well-set batter. At 125/1, the tourists were looking good for a big second-innings total when Overton took the crucial wicket of Latham that triggered a slide. New Zealand lost four wickets for 36 runs to be in dire straits at the end of Day 3. "I like to put my hand up in those sorts of situations, when things are tough. It was a great feeling to take that first wicket, and trying to get on the train with everyone else," added Overton. Virat Kohli Confronts Fan for Heckling Kamlesh Nagarkoti During Leicestershire vs India Warm-Up Match (Watch Video).

Overton, who came within sniffing distance of becoming the first England cricketer to score a Test hundred on debut from No. 8 or below before he missed it by three runs, added that there were two ways of looking at the innings -- either be disappointed or be delighted that the innings helped the team to a strong position. "You can look at it both ways. I'm delighted to get 97 in the first place -- I didn't think I'd get anywhere near that, especially after us being 55/6. It was just trying to build a partnership with Jonny (Bairstow), and we managed to build a really big one. It's put us in a great position in the game."

(The above story first appeared on LatestLY on Jun 26, 2022 11:29 AM IST. For more news and updates on politics, world, sports, entertainment and lifestyle, log on to our website latestly.com).