Four wickets after tea helped England restrict New Zealand's progress on the third day of the third and final Test, reducing the visitors to 168/5 in their second innings and a lead of 137 runs. 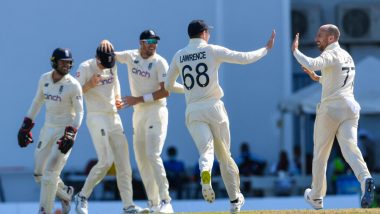 Leeds, June 26 : Four wickets after tea helped England restrict New Zealand's progress on the third day of the third and final Test, reducing the visitors to 168/5 in their second innings and a lead of 137 runs. Daryl Mitchell (not out 4) and wicketkeeper Tom Blundell (not out 5), who had rescued New Zealand in the first innings with a 120-run partnership, were at the crease at stumps, shouldering New Zealand's hopes as they look to set England a tricky target in the third Test at Headingley. England would be hoping to get them out early and chase down the target without much trouble for a clean sweep in the three-Test series after winning the first two Tests. Virat Kohli Confronts Fan for Heckling Kamlesh Nagarkoti During Leicestershire vs India Warm-Up Match (Watch Video).

What seemed like an impossible dream at one point with England reduced to 55/5 at one juncture, turned into a reality as the hosts managed to take a crucial first-innings lead. Jonny Bairstow struck a brilliant 162, adding 137 runs for the sixth wicket stand with Jamie Overton (97). It was heartbreak for debutant Overton, who missed out on a well-deserved ton by a mere three runs, with Trent Boult getting his wicket with a lovely delivery that shaped away from him.

Stuart Broad was a man on the mission though, opening up his blade and playing an entertaining knock of 42 off 36, before being bowled by Tim Southee. Bairstow would finally perish for 162 against the spin of Michael Bracewell. Jack Leach was the final man to depart for 3, but the efforts of the lower order along with the brilliance of Jonny Bairstow ensured that England reached 360 and took a slender 31-run lead.

It has been a poor series for two of New Zealand's key batters -- skipper Kane Williamson and his deputy Tom Latham. While Latham struggled in both the Tests and the first innings of the ongoing Test in Leeds, Williamson missed the second match due to Covid. On Saturday, the pair finally showed some semblance of form in the second session. After losing Will Young relatively early, the onus was even more on the two experienced veterans to steady the ship. Latham registered his first half-century of the tour while Williamson would look solid, batting through the majority of the afternoon session, which could only be a positive for the Kiwis. India vs Leicestershire: Virat Kohli, Ravindra Jadeja Score Half Centuries As Visitors End Day 3 With 366-Run Lead.

With the Black Caps looking set for a sizeable lead, it was England's two inexperienced seamers who stepped up to stem the tide, said a report on ICC's website. Overton, fresh from his outstanding efforts with the bat, teased an edge from Latham to send the opener packing for 76. And it was Potts who drew the edge from Kane Williamson, with the New Zealand skipper dismissed two runs shy of his half-century. A sharp catch from Ollie Pope at short leg did for Devon Conway (11) off the bowling of Joe Root, and it was Jack Leach who removed Henry Nicholls (7) caught and bowled to leave the tourists five down on the day. Rain brought an early halt to proceedings with the score at 168/5, but the four wickets after tea leave the Test finely balanced heading into the fourth day.

(The above story first appeared on LatestLY on Jun 26, 2022 10:31 AM IST. For more news and updates on politics, world, sports, entertainment and lifestyle, log on to our website latestly.com).