Jemimah, then only 16, smashed a brilliant double century in an Under-19 one-day match against Saurashtra. Her magnificent century off just 163 deliveries comprised of 21 fours. But like Jemimah put it that day it took a lot more effort, concentration and belief. She stitched 300-run opening stand and helped Mumbai post 347/2 in 50 overs. 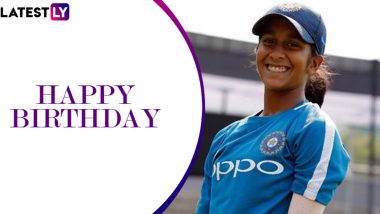 India women’s cricketer Jemimah Rodrigues celebrates her 20th birthday on September 5, 2020 (Saturday). The right-handed batswoman and part-time bowler has so far represented India in 16 WODI matches and 44 WT20Is and has already played in two ICC World Cup tournaments. She made her India debut of February 13, 2018, in a WT20I match against South Africa. A month later, Jemimah made her WODI debut against Australia. Although she is yet to score her maiden international hundred, Jemimah has already hit nine fifties and most of them on winning occasions. As she turns 20, take a look at some best performances by Jemimah Rodrigues. Jemimah Rodrigues Shakes Her Legs Again, Teaches Bollywood Dance Step to Australian Kids (Watch Video).

Jemimah started her career at school while playing in a girls’ cricket team started by her father, who was a junior coach in the same school. Initially, at the start, she played both hockey and cricket and even represented Mumbai U17 teams in both sports before completely shifting towards cricket. She has gone to become of the national team’s most versatile batsman with her ability to bat anywhere in the lineup but surprisingly, Jemimah started as a bowler. Today she has two big daddy hundreds to her name in Indians domestic circuit. Jemimah Rodrigues Breaks Into a Jig With Off-Duty Security Guard Ahead of India vs New Zealand Clash in ICC Women’s T20 World Cup (Watch Video).

202* Against Saurashtra in Aurangabad

Jemimah, then only 16, smashed a brilliant double century in an Under-19 one-day match against Saurashtra. Her magnificent century off just 163 deliveries comprised of 21 fours. But like Jemimah put it that day it took a lot more effort, concentration and belief. She stitched 300-run opening stand with Sejal Raut and helped Mumbai post 347/2 in 50 overs.

In reply, Saurashtra were bowled out for 62 and Mumbai won by a massive 285 runs. Her double century was more special than just another match-winning innings. It was only the second double hundred in women's U-19 limited-overs cricket in India. Smriti Mandhana, her now team India opening partner, had struck the first against Gujarat in 2013.

178 Against Gujarat in Aurangabad

This came just a match prior to her double hundred in the U19 One-Day League tournament, Jemimah had struck 178 against Gujarat in the second match of the competition. It was this innings, she would later say that gave her the self-belief that a near-impossible dream of making 200 was actually possible. Her mammoth score helped Mumbai record a big win against Gujarat. A match and one double century later, Jemimah would become the country’s bright and future women’s star.

81* Against New Zealand Women in Napier

Her highest score in WODIs. This was also Jemimah’s maiden WODI fifty in her only fifth appearance in Indian colours. She had come close to scoring a half-century in her second WODI appearance against Australia but fell short by eight runs. Here though, Jemimah found a sweet company in Smriti Mandhana. Together they shared a 190-run stand with Mandhana smashing her fourth WODI century and Jemimah her maiden WODI fifty. India won by nine wickets and 17 overs to spare.

Mumbai faced Bengal in the 2018 senior Women’s One-Day League with qualification at stake. A win with two matches remaining will help the winners’ progress to the knockout stage. And Jemimah ensured Mumbai won. She first struck with her slow off-breaks taking 3/23 before scoring a fine century to help her side clinch the win. Jemimah scored 133 not-out from 118 deliveries with the help of 19 boundaries. It was a complete performance from the talented cricketer.

40* Against West Indies in North Providence

Jemimah Rodrigues has scored six fifties in WT20I cricket. Five of them have come on winning occasions and most have been playing second fiddle to others. But this was one innings where she led from the front and took India home. West Indies batted first and could only manage 59 in 20 overs. A win will help India clinch the five-match series.

But as they found, it wasn’t going to be easy. India lost Shafali Verma in the first over, Smriti Mandhana in the fifth and captain Harmanpreet Kaur six overs later. When Harmanpreet departed for 7 runs, India were at 37/3 but most of the runs had come from Jemimah’s bat, who looked a class above the rest. She took India home with a knock of 40 runs not-out from 51 deliveries and four boundaries.

The next best score in the match was 11 and only three batswomen had managed three figures in the game, Jemimah among them. It was a class innings from the 19-year-old on a pitch where the ball turned square and fair and most failed to play shots. Her composed innings told story of how talented and important she was to India women’s cricket future.

(The above story first appeared on LatestLY on Sep 05, 2020 08:11 AM IST. For more news and updates on politics, world, sports, entertainment and lifestyle, log on to our website latestly.com).