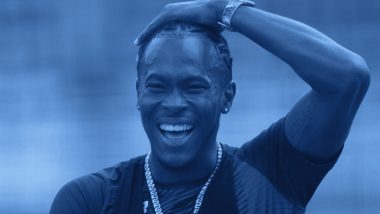 Jofra Archer plundered Lungi Ngidi for four successive sixes during the RR vs CSK match in IPL 2020. Archer facing his second delivery in the match smashed Ngidi for a six over long-off and followed it three more sixes to give RR a powerful finish to their innings. Archer’s exploits helped Rajasthan Royals end their innings with 216 runs on board after starting the final over on 186. Like always, Archer’s old tweets has gone viral following his innings against Chennai Super Kings. Fans have once again started asking of the England quick already knew about his exploits before he even did it. RR vs CSK Live Score Updates IPL 2020.

Archer’s old tweet that has gone viral reads “I count six shots” suggesting that he could play six different shots for six different deliveries. He didn’t play six different shots but smashed the ball to four different corners of the stadium in the final over of Rajasthan Royals’ innings. Take a look at the tweet from Archer. MS Dhoni Indulges in an On-Field Altercation With Umpire During RR vs CSK, Dream11 IPL 2020, Netizens Slam Captain Cool For the Behaviour (Watch Video).

The 25-year-old was on one run from the only ball he faced when Lungi Ngidi stepped up to bowl the final over. The first delivery from Ngidi was a slow ball and Archer dispatched it into the stands over long-off. The next one was a short delivery and Archer sent it out of the stadium over the square-leg boundary. The next ball was at stumps and went over long-on. To add to Ngidi and CSK’s woes, it was a no-ball. Archer and RR had a free-hit and he smashed the ball over long-off. The first two deliveries produced 26 runs for Rajasthan Royals. They eventually took 30 from the over with Archer remaining not-out on 27 from eight deliveries.

Meanwhile, Rajasthan Royals were off to a flying start despite losing Yashasvi Jaiswal early in the match. Jaiswal was dismissed by Deepak Chahar in the third over. But Sanju Samson ensured the wicket didn’t have a big effect. Samson smashed 74 off just 32 deliveries with the help of nine sixes and four boundaries. He took the spinners apart and reached his half-century in just 19 deliveries. Steve Smith also scored a fifty for Rajasthan Royals.

(The above story first appeared on LatestLY on Sep 22, 2020 10:10 PM IST. For more news and updates on politics, world, sports, entertainment and lifestyle, log on to our website latestly.com).