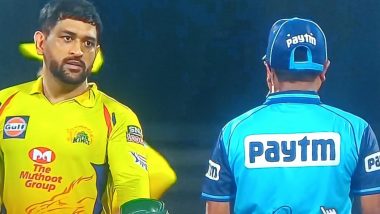 MS Dhoni has always maintained his calm on the field but when he does, he grabs headlines for the same. Today was the occasion when CSK captain lost his cool during the match against the Rajasthan Royals, IPL 2020. He was involved in an on-field altercation with the on-field umpire Chettithody Shamshuddin in the 17.5 over. Tom Curran was handling the batting duties and Deepak Chahar was the bowler. The umpires had initially adjudged Tom Curran as out but then he decided to go upstairs and review the same. The replays showed that he was not out Curran had already walked off the pitch. The umpires called him back. This did not go down well with MS Dhoni and he got into an on-field altercation with the umpire. The netizens were quite annoyed with the behaviour and they slammed CSK captain for the same. RR vs CSK Live Score Updates.

A few of them were shocked to see MS Dhoni’s behaviour and said that they thought that he was an honest man. The others slammed Dhoni's sportsmen spirit. Rajasthan Royals was hammering Chennai Super Kings in the first inning when they were asked to bat. Sanju Samson scored sith highest joint-highest half-century. Steve Smith also chipped in with a stunning half-century. Now, let's have a look at the video of the incident and the  tweets below:

MS Dhoni in an on-fielder altercation

A gentleman should play the game in the spirit of the game.

Rajasthan Royals has set a target of 217 runs for the opponents. While going online, the Yellow Army had made 36 runs from five balls from no loss of a wicket.

(The above story first appeared on LatestLY on Sep 22, 2020 10:06 PM IST. For more news and updates on politics, world, sports, entertainment and lifestyle, log on to our website latestly.com).