Legends League Cricket 2022 Schedule, Teams, Squads, Live Streaming Details and Everything We Know So Far About the Inaugural Edition of the T20 Competition

The inaugural edition of Legends League Cricket would bring all fan favourite cricket stars back once again on the cricket field where some intense rivalries would be seen unfolding. The competition starts on January 20. 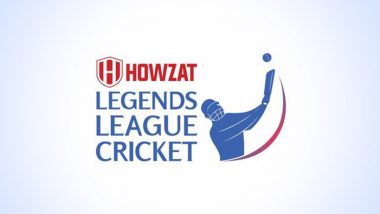 Cricket fans would once again be excited to watch some of the former greats of the game return to action in the Legends League Cricket (LLC) which starts on January 20. The inaugural edition of the competition, which would be in T20 format, would feature a total of three teams--India Maharajas, World Giants and Asia Lions. Retired cricketers from India, Pakistan, Australia, Sri Lanka and England among other countries, who have graced the game in the past, would turn on the heat once again at the Al Amerat Cricket Stadium in Muscat, Oman, which is the official venue for all the games. The final would be played on January 29 Legends League Cricket 2022: Mohammed Kaif, Stuart Binny Join India Maharaja Team

Big names like Shoaib Akhtar, Sanath Jayasuriya, Wasim Akram and Mohammad Kaif, among others, would be seen in action. The tournament has roped in former India head coach Ravi Shastri as its commissioner with the legendary Jhulan Goswami as brand ambassador. Also, Bollywood legend Amitabh Bachchan has also been made a brand ambassador of this competition. Shoaib Akhtar, Shahid Afridi, Sanath Jayasuriya Named in Asia Lions Squad for Legends Cricket League 2022

Sony Sports Network have acquired telecast rights for this competition in India. All matches would begin from 8 pm IST and would be telecasted live on Sony TEN 1 and Sony TEN 3. The matches can be live-streamed by fans on the SonyLiv app.

There would be two rounds in the Group Stage on the mentioned dates and the final would be played on January 29.

Shastri, the commissioner, was quoted as saying, "It feels great to remain connected with cricket in the thick of the action, especially with the legends of the game who have been champions in their own rights. It is going to be a lot of fun with some serious cricket going. These stalwarts have nothing new to prove but they have their reputation in line and I can assure you, it will be interesting to see how they do justice to it." It would be a treat for cricket fans all over the world!

(The above story first appeared on LatestLY on Jan 09, 2022 12:26 PM IST. For more news and updates on politics, world, sports, entertainment and lifestyle, log on to our website latestly.com).