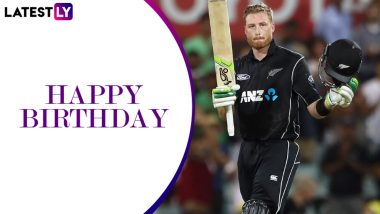 One of the most dangerous opening batsmen going around, Martin Guptill turns 34 on Wednesday (September 30) and birthday wishes are pouring in for him from all around the world. Hailing from Auckland, the right-handed batsman likes to go after the bowlers from the outset and his tendency playing long makes him a great asset. Guptill has been a regular face in New Zealand's XI for a long time and also played a vital role in the team's rise at the highest level. The cricketer was also part of New Zealand's squad that reached the finals of the Cricket World Cup in 2015 and 2019. When Martin Guptill Brought Up the Highest Individual Score in World Cup History.

The dashing opener made his debut in January 2009 and has emerged as the cornerstone of Black Caps in white-ball cricket. Speaking of his numbers, the batsman has scored 2586, 6843, 2536 in 43 Tests, 183 ODIs 86 T20Is respectively. Well, these numbers are staggering by any standards and Guptill will be determined to add many more feathers to his already-illustrious hat. Meanwhile, on as Martin Guptill turns a year older, let's look at some lesser-known facts and records of the Kiwi swashbuckler. A Look at Some Magnificent Innings Played by Martin Guptill.

Amid the COVID-19 induced halt, Guptill hasn't played any professional match since March. However, the veteran cricketer should buckle up as New Zealand have a long season ahead, starting from November 27. Pakistan, West Indies and Bangladesh are scheduled to travel the Kiwi nation, and Guptill will undoubtedly be critical to Black Caps' success.

(The above story first appeared on LatestLY on Sep 30, 2020 08:00 AM IST. For more news and updates on politics, world, sports, entertainment and lifestyle, log on to our website latestly.com).