On This Day: When Martin Guptill Brought Up the Highest Individual Score in World Cup History

Facing the Caribbeans in the 4th quarter-final of the tournament at Wellington, the right-handed opener put up a brilliant batting display and went on to score a stellar double century. Guptill rained fours and sixes and made an absolute mockery of the opposition bowlers. 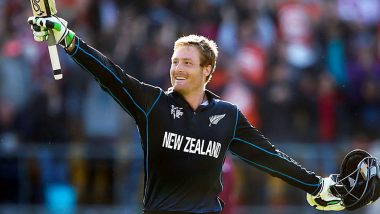 Remember when Martin Guptill unleashed an absolute carnage against West Indies in the 2015 World Cup and registered the highest individual score in the tournament’s history? Well, that magnificent double-century has completed West five years and we’ll revisit that innings. Facing the Caribbeans in the 4th quarter-final of the tournament at Wellington, the right-handed opener put up a brilliant batting display and went on to score a stellar double century. A Look at Some Magnificent Innings Played by Martin Guptill.

He, however, looked unsettled in the first few balls he faced and was even dropped at an individual score of four. Well, the drop catch proved to be costly as Guptill didn’t put a foot wrong after that and scored runs all over the park. Facing the likes of Jerome Taylor, Andre Russell and Jason Holder, the dasher paced his knock to perfection. Continuing his sensational run, the batsman brought up his century off 111 balls. However, what happened after that was nothing less than a miracle.

Guptill rained fours and sixes and made an absolute mockery of the opposition bowlers. He quickly reached to the 150-run mark and sooner, became the second batsman to score a double-century in World Cups, the first being Chris Gayle. Well, he didn’t stop after that either and ended up scoring 237 runs off 163 deliveries, the highest individual score in World Cups.

His efforts guided the Kiwis to a mammoth score of 393 in the first innings. In reply, the Men in Maroon tried to make a fightback as players like Chris Gayle and Jason Holder played some handy cameos. However, the target proved to be too much as they got bundled out for 250 runs and lost the match by 143 runs. With this win, the Kiwis advanced to the semi-finals and later, finished the tournament as runner ups.

(The above story first appeared on LatestLY on Mar 21, 2020 11:08 AM IST. For more news and updates on politics, world, sports, entertainment and lifestyle, log on to our website latestly.com).