The Karnataka batsman, who lost his opening slot to Rohit Sharma during the Tests against Australia, would want to get back to form and use this opportunity to cement his place in the absence of the injured Shubman Gill. 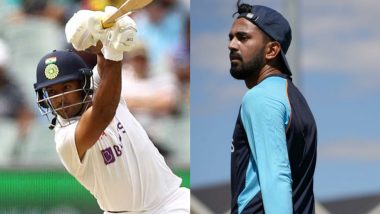 Mayank Agarwal would get an opportunity to prove his batting potential at the top of the order when he would reportedly be opening the innings alongside Rohit Sharma against County Select XI which starts in Durham on July 20, Tuesday. He would come into the side in place of Shubman Gill, who was earlier ruled out of the series due to an injury. A good performance can not just build his confidence but also cement his spot alongside Rohit Sharma. Reports also suggest that KL Rahul would be the wicket-keeper for this match, with both Wriddhiman Saha (in isolation) and Rishabh Pant (recovering from COVID-19) unavailable. KL Rahul Set To Don Wicketkeeping Gloves in India’s Practice Match Against County Select XI in Durham

"Even if Pant would have reached in time for the practice game, he would have been given adequate rest to get back in peak physical condition. He has been asymptomatic but would need to train well ahead of the first Test in Nottingham," a BCCI official said, adding, "In any case both Pant and Wriddhiman, who is isolated as a precautionary measure will be available for first Test."

Rahul has been engaging in a lot of keeping practice and would be making use of this opportunity. With the bat, he would be looking to have a slot in the middle-order. But there would be more focus laid on Agarwal, who is coming back to the Test squad after losing his place to Rohit Sharma during the Australia tour last year. His return to form would be very important and a timely one for India, given that Gill is ruled out with injury. Sourav Ganguly Defends Rishabh Pant for Not Wearing a Mask During Euro 2020, Says ‘Rules Have Changed’

Their opponents County Select XI, comprises mostly of youngsters and it would be a good opportunity for India to test their skills and prepare strongly ahead of the first Test, which starts on August 4. This warm-up game has been given the status of a first-class fixture.  Indian bowlers, namely Jasprit Bumrah and Mohammad Siraj would also aim to get some crucial match practice with some wickets which would help them feel confident ahead of the much-awaited Test series against England.

(The above story first appeared on LatestLY on Jul 19, 2021 07:27 PM IST. For more news and updates on politics, world, sports, entertainment and lifestyle, log on to our website latestly.com).