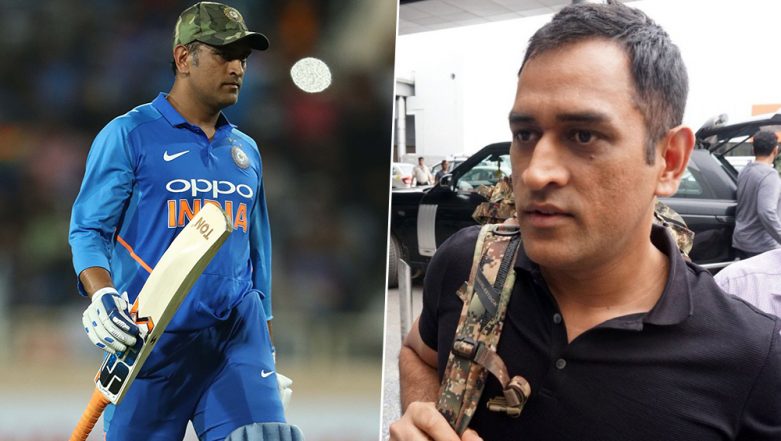 MS Dhoni departed for Srinagar from Delhi’s Indira Gandhi International Airport on Tuesday to join his battalion in the Indian Army. The Indian Cricketer has made himself unavailable for India vs West Indies 2019 tour as he wanted to join his battalion of Indian Army in Jammu and Kashmir for training. Now going by his words, the Indian cricket legend left for Srinagar to join Indian Army Parachute Regiment 106 Territorial Army Battalion. MS Dhoni Delivers a Speech in Chennai Ahead of Joining in His Regiment in Kashmir (Watch Video).

A photo of MSD at Delhi’s Indian Gandhi International Airport was shared on social media. The 38-year-old Dhoni holds the honorary rank of Lieutenant Colonel in the Territorial Army unit of the Parachute Regiment (106 Para TA battalion). Have a look at photo of MS Dhoni at Delhi’s IGI Airport below.

Indian cricketer #MSDhoni leaves for #Srinagar from #IndiraGandhiInternationalAirport in #NewDelhi on July 30. #MahendraSinghDhoni, who was awarded the honorary rank of a lieutenant colonel in 2011, will join his battalion in #JammuandKashmir.

Earlier, reports claimed that Dhoni will undertake duties of patrolling, guard and post duty during his training period with the battalion. His training will start from July 30, 2019 and will end on August 15. The Chennai Super Kings captain was given the rank in the battalion by the Indian Army in 2011. Dhoni successfully completed five training jumps from Indian Army aircraft in Agra training camp in 2011 and became a qualified paratrooper. Along with Dhoni, Indian shooter Abhinav Bindra and Deepak Rao were also accorded with the honour. ICC World Test Championship 2019: With No MS Dhoni in Test Matches, Will India Use Jersey No 7?

Meanwhile, the Indian Team has also departed for United States and West Indies for upcoming India’s tour of West Indies 2109. India will play three T20s, three ODIs and two Tests against West Indies. The first T20 will be played on August 3 in Florida, US.  Other than Dhoni, Hardik Pandya will also be absent from the tour as he has been given rest. Virat Kohli will lead the team as skipper in all the three series.