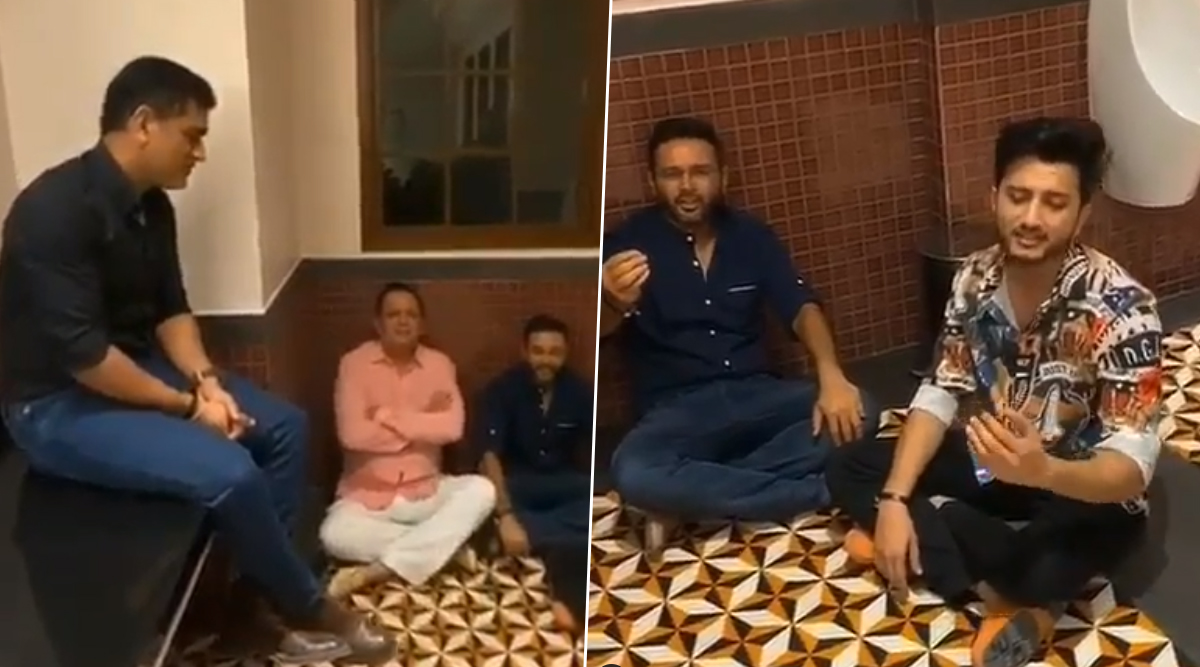 MS Dhoni may have been off the cricket field in the last eight months but that doesn’t keep him off the headlines. With Dhoni not returning to the cricket fold nor announcing his future move, fans have gone crazy over the whereabouts and activities of their favourite cricketer. Such high has been the demand for news regarding Dhoni that any picture or piece of information with the former Indian wicket-keeper captain in it, has gone viral on the internet. The latest episode in that is Dhoni enjoying a jamming session with fellow national teammates Parthiv Patel and Piyush Chawla in the bathroom. Yes, you heard that right! A video showing Dhoni singing ‘Mere Mehboob Qayamat Hogi’ alongside Parthiv, Piyush and singer Ishaan Khan has gone viral. MS Dhoni Serves Panipuri to RP Singh and Piyush Chawla During His Maldives Vacation (Watch Video).

Well, the video doesn’t show Dhoni singing but the veteran Indian cricketer can be seen enjoying a singing session with singer Ishaan Khan, Parthiv Patel and Piyush Chawla. Khan is heard singing a chorus from the song ‘Mere Mehboob Qayamat Hogi’ with Patel and Dhoni humming. ‘Mere Mehboob Qayamat Hogi’ is sung by singing giant Kishore Kumar. The song was part of the Bollywood adventure movie Mr. X in Bombay in which Kumar himself plays the lead role. Fans Eager for MS Dhoni’s Return to Cricket Field As #AwaitingForDHONIComeback Trends on Twitter Ahead of IPL 2020.

Meanwhile, Dhoni is yet to make an appearance for India post the 2019 ICC Cricket World Cup heart-breaking defeat in the semi-finals. The 38-year-old initially took a two-month break to train alongside his paramilitary regiment but has since not returned to the national fold nor has he played a game in Indian domestic circuit. Dhoni has, however, been seen training on a few occasions at the Ranchi stadium in his hometown.

Chennai Super Kings retained Dhoni for the next edition of the Indian Premier League (IPL) and has also kept him the captain. CSK, runners-up in 2019, also picked Piyush Chawla at the IPL 2020 players auctions, making the experienced leggie their most expensive buy at the auctions at Rs 6.75 crore.