Interestingly, both these sides would have be facing off against each other after a period of 10 years. Their last international encounter resulted in Scotland winning by 5 wickets (D/L method) in the ICC World Cricket League Championship on June 29, 2011. 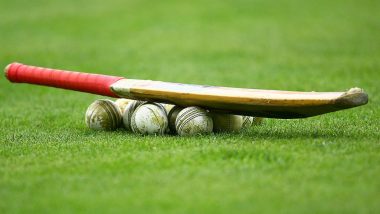 The Netherlands cricket team is geared up to host Scotland in a two-match ODI series at the Hazelaarweg Stadion in Rotterdam, the first of which is set to start tomorrow, May 19, 2021. Both these sides would be returning to 50-over cricketing action after a hiatus of more than a year with Scotland playing an ODI back in December 2019 where they participated in the Cricket World Cup League Two in the UAE. Netherlands on the other hand, played a T20 tri-series in which they went down to Nepal in the final, being bundled out for just 96 runs, while chasing a mammoth total of 239. ICC Planning To Expand T20 World Cup and Considering Sport's Inclusion in Olympics.

Interestingly, both these sides would have be facing off against each other after a period of 10 years. Their last international encounter resulted in Scotland winning by 5 wickets (D/L method) in the ICC World Cricket League Championship on June 29, 2011. In terms of advantage, Scotland clearly hold the upper hand over their opponents with four victories in their last five international meetings.

This ODI series between the two associate nations would serve as a good preparation for the Dutchmen, who are slated to host Ireland for three matches in the ICC Cricket World Cup Super League in June. The Scots could be at a slight disadvantage here because they haven't played any international cricket since 2019 due to the outbreak of COVID-19. They would lack match practice and beating Netherlands on their home turf is going to be a difficult feat. But with the experience of skipper Kyle Coetzer, who was named the 'ICC Associate Player of the Decade', Scotland would expect they get some much-needed match practice before they start playing the qualifiers for the 2022 T20 World Cup. Netherlands skipper Peter Seelar would expect Max O’Dowd, who quite recently scored a maiden hundred in T20Is, to come good with the bat again.

(The above story first appeared on LatestLY on May 18, 2021 06:38 PM IST. For more news and updates on politics, world, sports, entertainment and lifestyle, log on to our website latestly.com).