With race for IPL 2022 playoffs heating up, Punjab Kings and Rajasthan Royals will be looking to inch closer to the qualification. For PBKS vs RR live streaming online and tv telecast details you can scroll down. 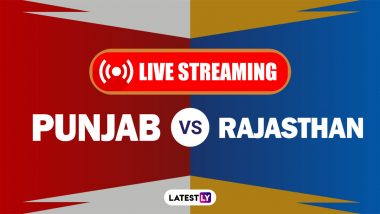 This season's Indian Premier League is shaping up to be a keenly contested fight with all teams barring the Chennai Super Kings and the Mumbai Indians in the fight for play-offs. Two such sides, the Punjab Kings and the Rajasthan Royals, battle it out in the first game of the weekend doubleheader. Rajasthan come into the match on the back of two defeats which has hurt their progress a bit but still sit comfortably at third place in the league table. But that could change should Punjab Kings win this game this afternoon. Consistency has been a problem for Punjab but they do get then odd wins under their belt to remain firmly in the race. IPL 2022 Playoffs Qualification Scenario Explained: Here’s a Look at the Chances of GT, RR, SRH, LSG, RCB, PBKS, DC, KKR, and CSK of Making It To Last Four.

Shikhar Dhawan got another fifty to his name in the IPL in the game against Gujarat Titans and PBKS will hope the Indian opener can build on this momentum. Time and again Dhawan has not performed post a big score and that trend needs to reverse. Kagiso Rabada started off slowly but is now third in the list of Purple cap holder with 17 wickets. He has the potential to stop Rajasthan from dominating in the powerplays.

Jos Butler with 588 runs in the tournament so far has had an enormous impact on the Rajasthan batting unit. His ability to attack from the word go often takes the pressure off the middle order batsmen as they can take their time own time to settle. Their defeat against Mumbai though was a tough pill to swallow considering they just failed to turn up in all three departments.

Those unable to watch the PBKS vs RR match live on television can follow the game online. Disney+ Hotstar will be live streaming the Punjab Kings vs Rajasthan Royals match online for its fans in India. Fans, however, need to subscribe to Hotstar by paying a nominal subscription fee.

(The above story first appeared on LatestLY on May 07, 2022 12:42 PM IST. For more news and updates on politics, world, sports, entertainment and lifestyle, log on to our website latestly.com).