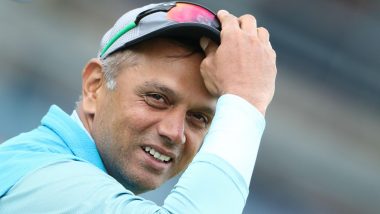 Rahul Dravid could be accompanying the Indian team which will be boarding the plane for Sri Lanka. As per reports, the former Indian captain Rahul Dravid could be coaching the team. The Indian cricket team will be playing three ODIs and the same number of games. The venues will be decided later. But the first ODI match will be played on July 13, 2021, and the second game will be played three days later.  The last ODI match between India and Sri Lanka will be played on July 19, 2021. India Tour of Sri Lanka 2021 Schedule: 3 ODIs and As Many T20Is to be Played in July.

The T20I series will begin on July 22, 2021, and will end on 27 of the same month.  There has also some talk that Rahul Dravid and his staff at the National Cricket Academy (NCA) will be asked to accompany the group as coaches. The office-bearer did not rule out the possibility of the former Indian captain accompanying the Indian cricket team.

- Venues to be finalised later.

"We have planned a white ball series for the senior men's team during the month of July where they will play T20 Internationals and ODIs in Sri Lanka," Ganguly told PTI and the office-bearer confirmed that an Indian team of white ball specialists will play three ODIs and three T20Is in the island nation.

(The above story first appeared on LatestLY on May 10, 2021 08:52 PM IST. For more news and updates on politics, world, sports, entertainment and lifestyle, log on to our website latestly.com).